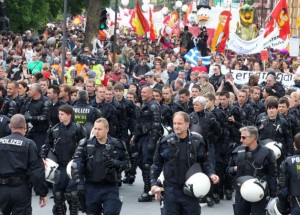 BERLIN (AP) — At least 20,000 people held a major rally of the local Occupy movement in Frankfurt on Saturday to decry austerity measures affecting much of Europe, the dominance of banks, and what they call untamed capitalism.

The protesters peacefully filled the city center of continental Europe’s biggest financial hub on a warm and pleasant afternoon, said Frankfurt police spokesman Ruediger Regis. He said 20,000 people were there, while organizers put the number at 25,000.

The protest group, named Blockupy, has called for blocking access to the European Central Bank, which is located in Frankfurt’s business district.
Organizer spokesman Roland Seuss the protest is “against the Europe-wide austerity dictate by the (creditor) troika of ECB, the EU Commission and the International Monetary Fund.”

Last year, thousands in Germany took to the streets in rallies during the worldwide Occupy movement. But as Germany’s economy is robust and unemployment at a record-low, those protests have mostly fizzled out.

But Europe’s lingering debt crisis has given new fuel to some demonstrations.

Germany, Europe’s biggest economy, suffers none of the austerity measures now heavily affecting southern European nations such as Greece, Portugal and Spain. But Germany has championed the sometimes harsh spending cuts across Europe to get deficits under control.

Chancellor Angela Merkel has pushed through a European treaty enshrining fiscal discipline, but she is being criticized for suffocating growth through her insistence on austerity measures.

Her conservative government has rejected significant new stimulus measures, but Merkel is increasingly pressured — not least by newly elected French President Francois Hollande and President Barack Obama — to prop up investment to foster growth and avoid another recession in Europe.

“We are in solidarity with the people of Greece and other European countries who are already gravely suffering from (budget) cuts across the board which threaten their very existence,” Suess said.