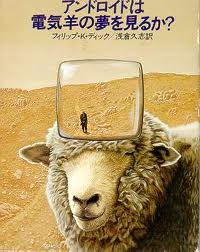 A few years ago, a team of researchers attempted to build an android replica of the late, great science fiction writer Philip K. Dick. They did a good job but somehow lost the android’s head — the most important part, of course — at an airport. The story is told in a nonfiction book called How To Build An Android, reviewed this week in the NYT. The review makes the Dick android sound amazingly like the first android to run for president, Mitt Romney:

The [android] was a dazzling blend of technology and art. He was also erratic, as you might expect any first-generation android to be. Unexpected questions and loud noises threw him off. Androids have a hard time responding to human speech cues, knowing when to answer and when to stop. Sometimes Phil would get into a self-­perpetuating conversational loop. His handlers — who monitored his responses on a computer screen — had to keep a close eye.

Let’s hope Romney’s handlers are more careful in transporting their android than handlers of the Dick android were.

One thought on “Do androids dream of electric sheep, I mean voters?”