Update: UPHELD. Not under the commerce clause, but under the taxing authority of Congress.

“Our precedent demonstrates that Congress had the power to impose the exaction in Section 5000A under the taxing power, and that Section 5000A need not be read to do more than impose a tax. This is sufficient to sustain it.”

The key comment on salvaging the Medicaid expansion is this (from Roberts): “Nothing in our opinion precludes Congress from offering funds under the ACA to expand the availability of health care, and requiring that states accepting such funds comply with the conditions on their use. What Congress is not free to do is to penalize States that choose not to participate in that new program by taking away their existing Medicaid funding.” (p. 55)
***

Hmm. This part is not so good. Removes big stick that permits administration to compel states to comply with Medicaid expansion. Republican governors could be really big problem.
***
Justice Ginsburg makes clear that the vote is 5-4 on sustaining the mandate as a form of tax. Her opinion, for herself and Sotomayor, Breyer and Kagan, joins the key section of Roberts opinion on that point. She would go further and uphold the mandate under the Commerce Clause, which Roberts wouldn’t. Her opinion on Commerce does not control.

Justice Ginsburg would uphold Medicaid just as Congress wrote it. That, too, is not controlling.
***
In opening his statement in dissent, Kennedy says: “In our view, the entire Act before us is invalid in its entirety.”
***

Strikes down mandate. Sort of. “Upheld as a tax.”WTF? Looking for details. No, apparently it’s been upheld. CNN was wrong.

Roberts joins the left of the court in the decision. Medicaid provision is “limited but not invalidated.”

“The exception that the federal government’s power to terminate states’ Medicaid funds is narrowly read.” 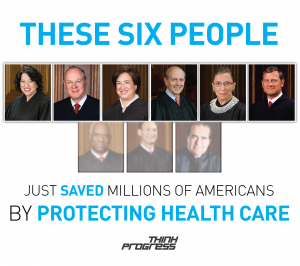