Talk about Wisconsin redux! All of a sudden, teachers are the enemy of the state. All of a sudden, our public schools are worthless and need to be overhauled by CEOs and people who have never taught a day in their lives (except the shock troops of Teach for America, which is to teaching what McDonald’s is to food). But many, many so-called liberals have been sucked into this argument, enabling what is little more than an elite union-busting, money-making operation.

Because you know what? The “problem” with our schools is the same as it always was: Poverty. Schools are funded by local property taxes instead of state or federal taxes, and that means if your parents are poor and don’t read, you probably won’t, either. It means that your district becomes a political football when teachers can’t quite weave straw into gold, and are punished by CUTTING THE SCHOOL FUNDING. As if that makes sense.

America is not falling behind in math and science in the rich districts. Only the poor ones. One might think there’s a message in there, but it doesn’t fit the corporate schools agenda.

There are a lot of straw men set up in this argument, and desperate parents will grab at any of them if they think it will help their kids. But study after study finds the same thing: For-profit charter schools do not perform better, and in many instances, they perform worse. Yes, well, adding a profit motive to something will do that.

So when the media tries to paint this teacher strike as greedy unions vs. “reform,” don’t buy what they’re selling. Read this instead: 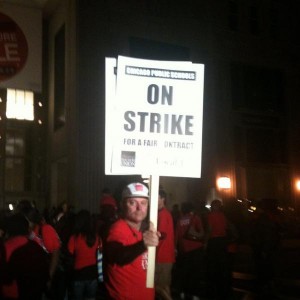 From the Chicago Sun-Times:

Chicago Teachers Union members will go on strike Monday morning after talks failed to yield a new contract, the head of the union announced late Sunday.

“In the morning, no CTU member will be inside our schools,” Karen Lewis said at 10 p.m. “Please seek alternative care for your children. …

“We have failed to reach an agreement that will prevent a labor strike.”

Lewis said progress was made, but no deal was hammered out during talks on Sunday. That set the stage for a teachers strike at midnight — and no classes Monday morning, the first chance the teachers had to strike after announcing strike plans 10 days ago.

Asked what parents should know, Vitale said: “More than likely, they’re going to have to take care of their kids tomorrow.”

Oh, and Rahm? Good luck counting on the teachers unions to get out the vote this year:

Emanuel is pushing for big changes: a longer school day and year, a new system for evaluating teachers and a whole new way to pay teachers. At the Democratic National Convention last week, he defended many of his reforms.

“For the first time in a decade, [students are] getting a very rigorous academic standard,” he said. “For the first time, we’re getting five new high schools all dedicated to science, technology, engineering and math. Six thousand more kids are going to magnet schools. We’re making major changes.”

The union wants Emanuel to pay teachers more for what amounts to more work.

Teachers are also pushing back on some reforms that the mayor didn’t tout at the DNC.

They want smaller class sizes, more art and music, and job protection when the district shuts down low-performing schools and opens privately run charter schools, which are not typically unionized.

3 thoughts on “Chicago teachers on strike”