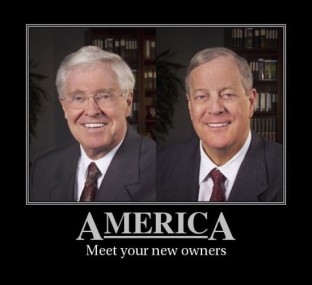 Ezra Klein on how Tribune employees can screw the Koch brothers:

The newspaper employees of Tribune — those who haven’t lost their job or driven away in disgust — have had their pensions robbed, their pay and benefits cut, their professional dignity assaulted and their enthusiasm sapped by the financial types who have serially raped these once-great newspapers over the past six years. As it turns out, they now have a golden opportunity to turn the tables on their tormenters and exact some revenge.

A new owner, of course, could hire new journalists, and certainly there are plenty of them out there looking for a job. But it would take time to attract them, get them working as a team and weed out the inevitable clunkers – and in any case, they are unlikely to have the experience and institutional memory of the people they replace. And in the meantime, competing news organizations would be quick to pick up Tribune’s stars and use them to lure away readers and advertisers at a time when circulation and revenue are already under pressure. Hell, in the age of the Internet, the rebellious journalists could easily start their own news organizations and grab a good chunk of their old readership within weeks.

This is a rare moment for Tribune’s beleaguered journalists. For the first time in a long time, they actually have leverage. They’d be crazy not to use it.

All it would take would be a letter to Tribune’s owners and investment bankers declaring that if the newspapers were sold to an owner who would not invest in quality, politically independent journalism, they will take their talent and experience elsewhere. A one-day strike or sick-out on the day the company is put up for sale would help to reinforce the threat.

Under such circumstances, Tribune and bankers would have a legal obligation to disclose this substantial risk to any prospective buyers in its prospectus. The effect would be to lower the eventual sale price, no matter who eventually buys it. And there is a good chance it would scare off any buyers whose aim is to turn Tribune’s news organizations into mouthpieces for ideological propaganda.

For any one journalist to make such a threat would be folly. For hundreds to do so collectively would be to lob a stink bomb into this carefully orchestrated sales effort.