A recipe for revolution, if you ask me:

No matter where you’re from, not having enough to eat is the ultimate signifier of economic distress. Food is the base of Maslow’s hierarchy. It’s the first concern in disaster zones. It’s usually the last thing to go — after the car and the nice apartment — when you lose your job.

If you can’t afford food, there’s really nowhere to go but up. That’s why it’s so shocking just how many more hungry people there are now in what were formerly known as the world’s well-off nations. According to a new Pew report released today, almost a quarter of people (24 percent) in the United States and Greece answered “yes” to the question, “Have there been times during the last year when you did not have enough money to buy food your family needed?”

The levels in other Western countries weren’t quite that high, but the rate at which hunger has swept the eurozone since 2007 is still really dramatic: 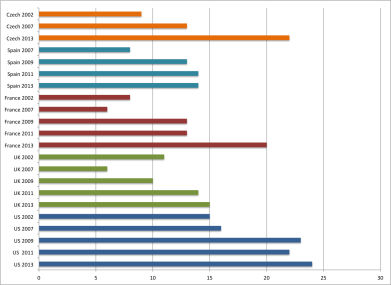 2 thoughts on “A quarter of the people in Greece — and U.S. — can’t afford food”