I was talking to a friend from North Carolina about the Moral Monday protests, and he said, “You know, I think Rev. [William] Barber might be the new Martin Luther King.”

He might be right. Just listen to that speech.

Every week, they arrest people. And the following week, the crowds get even bigger. This, dear readers, is a movement. And if you have money to put gas in the tank and some time to spare, you should get down to Asheville and join the fight. Because this is what democracy looks like:

Lee Creighton’s voice started to crack as he stood on a stage among the throngs gathered outside the Legislative Building for the eighth weekly protest of the legislature’s agenda.

The Triangle resident has degrees in math, statistics and French literature but has been out of work or underemployed for the past four years. His LinkedIn profile describes him as a statistician, data analyst, technical writer, trainer, Ph.D., and mathematician who is “currently available.”

In one week, Creighton will be among the 71,000 North Carolinians who will see their extended unemployment benefits end – the result of a new state law that goes into effect July 1. The law, among the first passed by the legislature this year, reduces the maximum state benefits a laid-off worker can receive by roughly one third. 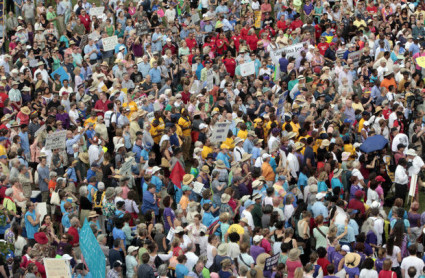 Creighton was called to the stage on Monday among the largest crowd yet gathered for the weekly “Moral Monday” demonstrations at the Legislative Building. Though organizers estimated that more than 5,000 were in the crowd, police put the count at between 2,500 and 3,000.

The Rev. William Barber, chief architect of the protests that now bring national media crews to the capital, said much of the policies and laws from the Republican-controlled N.C. General Assembly and governor’s office have been putting pen to paper, or “politics and signatures.”

Creighton, who has depleted his savings account, turns to his parents for help with groceries and weekly supplies. He bristles when he hears the unemployed and under-employed described as lazy people who are taking government handouts and living it up as if they were on vacation.

“The unemployed people are not deadbeats,” Creighton said, his voice cracking. “We’re not losing our jobs because we don’t want to work. …If this is such a vacation, why is it that I cry to sleep every night.”

Nearly 120 people were arrested and charged with trespassing, disorderly conduct and failure to disperse on command. That brings the total number of arrests to almost 600 on the same day that the first wave of protesters made their first appearance in Wake County District Court.

Irving Joyner, the N.C. Central University law professor representing the protesters, said he entered not guilty pleas on behalf of the 17 arrested on April 29. He also asked that their cases be dismissed, challenging the arrests as unconstitutional.

One thought on “Moral Mondays, Week 8”