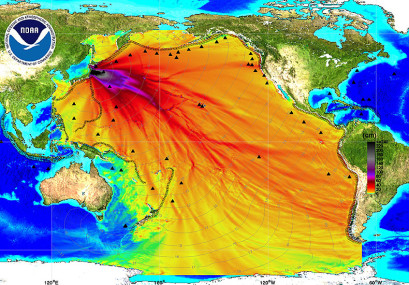 This is why I no longer eat any West Coast seafood. But don’t worry, I’m sure our people will get right on this!

Perhaps you’ve heard that radiation levels of the water leaving the Fukushima, Japan, nuclear power plane and flowing into the Pacific Ocean have risen by roughly 9,000 per cent. Turns out, that’s probably putting a good face on it.

By official measurement, the water coming out of Fukushima is currently 90,000 times more radioactive than officially “safe” drinking water.

These are the highest radiation levels measured at Fukusmima since March 2011, when an earthquake-triggered tsunami destroyed the plant’s four nuclear reactors, three of which melted down.

As with all nuclear reporting, precise and reliable details are hard to come by, but the current picture as of July 10 seems to be something like this:

” On July 5, radiation levels at Fukushima were what passes for “normal,” which means elevated and dangerous, but stable, according to measurements by the owner, the Tokyo Electric Power Company (TEPCO).

” On July 8, radiation levels had jumped about 90 times higher, as typically reported. TEPCO had no explanation for the increase.

” On July 9, radiation levels were up again from the previous day, but at a slower rate, about 22 per cent. TEPCO still had no explanation.

” On July 10, Japan’s Nuclear Regulation Authority (NRA) issued a statement saying that the NRA strongly suspects the radioactive water is coming from Fukushima’s Reactor #1 and is going into the Pacific.

“We must find the cause of the contamination . . . and put the highest priority on implementing countermeasures,” NRA Chairman Shunichi Tanaka told an NRA meeting, according to Japan Times.