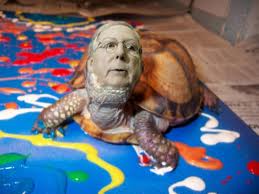 I’ve seen this happen before. (Remember Arlen Specter?) All of a sudden, the voters wake up from their long nap and think two things: “Geeze, this guy’s been around forever,” and “It’s probably time for some fresh blood.” Looks like Yertle the Turtle is on his way out:

New poll numbers released Thursday suggested that Senate Minority Leader Mitch McConnell (R-KY) is entering his reelection campaign next year facing two perilous obstacles: an electorate that wants him out of office and a viable Democratic challenger. The latest survey from Democratic-leaning Public Policy Polling — conducted on behalf of the Progressive Change Campaign Committee (PCCC) and Democracy For America and provided in advance to TPM — found Kentucky Secretary of State Alison Lundergan Grimes, wholaunched her Senate campaign on Tuesday, drawing the support of 45 percent of Bluegrass State voters and narrowly edging McConnell by a single point. Eleven percent of voters said they are undecided. The two liberal groups to commission the poll are both opposed to McConnell.

A slight majority of Kentucky voters — 51 percent — disapprove of the job McConnell is doing, giving the GOP leader an approval rating of 40 percent. PPP has previously identified McConnell as the least popular senator in the country, but the latest poll marks a marginal improvement It marks for a marginal bump since April, when McConnell nursed a 36 percent approval rating. PPP polled 1,210 Kentucky voters on those two questions, and the margin of error is 2.8 percent.

Kentucky voters may also be experiencing McConnell fatigue, according to PPP’s latest. When the pollsters asked if McConnell deserved reelection “[a]fter 30 years in the U.S. Senate,” 54 percent said he does not, compared with just 38 percent who said he does deserve another term. The pollster asked 625 voters that question, and it has a margin of error of 3.9 percent. PPP’s numbers are far less encouraging for McConnell than the findings from GOP firm Wenzel Strategies last week, which found the incumbent topping Grimes by eight points.

One thought on “Poor Yertle”