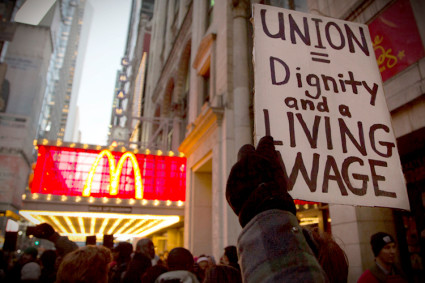 Really happy to see these workers standing up for themselves and everyone else:

Fast food strikers will escalate their campaign within the next week and a half, according to the key union backing their recent walkouts.

In a Monday interview in her Washington, D.C., office, Service Employees International Union president Mary Kay Henry told Salon that SEIU members “see the fast food workers as standing up for all of us. Because the conditions are exactly the same.” Henry was joined by SEIU assistant to the president for organizing Scott Courtney, who said to expect “a big escalation” from fast food workers in “the next week or 10 days.” Two weeks after one-day strikes by thousands of employees in the growing, non-union, low-wage industry, Courtney said, “I think they’re thinking much bigger, and while the iron’s hot they ought to strike. No pun intended.”

As Salon has reported, SEIU has been the key player behind the past year’s wave of fast food strikes, which began with a surprise walkout in New York City last November, spread this year to cities in the Midwest and West Coast, and escalated last month with strikes in seven cities over four days — by far the largest mobilization of fast food workers in the history of the United States.

In each city, workers are demanding a raise to $15 an hour and the chance to unionize without intimidation. With fast food jobs becoming increasingly prevalent in — and representative of — the U.S. economy, and embattled unions exploring and experimenting with tactics like those the fast food workers have taken up, their showdown has far-reaching consequences. SEIU, one of the largest U.S. unions, has devoted millions of dollars and dozens of staff to the campaign, which is also supported by a range of local and national progressive groups. In contrast to some past union efforts, said Henry, “It’s more about, ‘How do we shift things in the entire low-wage economy?’”