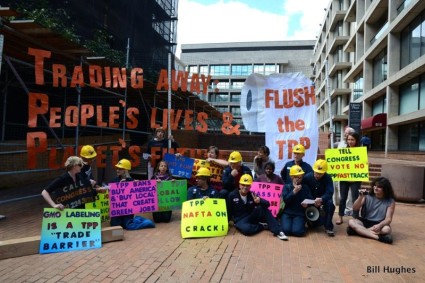 Glad that people are out there, exposing this proposed shitty deal:

This afternoon, September 23rd, protesters concerned about the looming Trans-Pacific Partnership (TPP) covered the Office of the U.S. Trade Representative with banners calling for a democratic process and a release of the treaty’s text. The group, which included members of FlushTheTPP.org, Backbone Campaign, Veterans for Peace, CODEPINK, and Earth First!, say that the TPP will have vast consequences for U.S. laws, workers rights, the environment and many other aspects of life.

We decided to expose these secret negotiations by going right to their national office and plastering the Office of the US Trade Representative with messages that let them and the public know what they are doing. We took over their office building today, and plan to continue to escalate tactics in Congress and wherever we see opportunities to expose the TPP, stop the undermining of democracy through Fast Track and have a real debate over whether the US wants rigged trade for big transnational corporations or fair trade that puts people and the planet before profits.

So far, the TPP has been drafted with an unprecedented degree of secrecy. While information has been kept from the public more than 600 corporate advisers have access to the treaty’s text – including companies such as Halliburton, Monsanto, Walmart, and Chevron. The Obama administration has kept the TPP classified, making it the first-ever classification of a trade agreement. In addition to denying public access to its text, the president has urged Congress to use Fast Track to pass the treaty. Fast Track would limit congressional consideration of the text to a quick up or down vote and give President Obama the power to sign and negotiate the treaty. This turns the Constitution on its head as the Commerce Clause authorizes Congress to “regulate commerce among nations” not the president.”

Seven advocates dressed as workers attached four massive banners to the front and side of the US Trade Representative’s office. Banners read “Transparency: Release the Text,” “Democracy, not Corporatocracy,” “Corporate Coup against the People and Planet” and “Flush The TPP.org.”  Other activists at the front of the building held a large 15 foot tall sign that said: “Trading Away People’s Lives and the Planet’s Future.”  They were able to cover the building in banners and hold this un-permitted protest and negotiate doing so without anyone getting arrested, in fact one activist who had been held in handcuffs was even released.