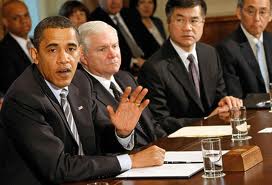 I don’t know what fascinates me more about this long, long Politico piece: That the Obama White House seems to have placed politics over governing, much to their detriment, or that it was done by Politico. It does confirm my initial concerns about Obama’s lack of executive experience. As much of a bubble as the White House is, he made it even smaller by relying completely on his political advisers. This is a mistake often made by liberals; they somehow think good intentions should always override experience, judgment and institutional knowledge. Years ago, I came to the conclusion that the most effective politicians were experienced politicians. (They are frequently the most corrupt politicians, which presents different problems.) They know how to move the levers of power.

And good management is not easy. I always remember this one management seminar that put us through an interesting exercise: You have a staff of ten, and you’re moving into a new office. Who gets which cubicle? (Because everyone wants to sit by the window.) You can’t believe how complicated it got. But I learned an important lesson about balancing competing interests — and in committing to your management decisions. This idea that Obama learned management skills in the chaotic environment of a campaign, which is more like an extended high-stakes poker game fueled by booze and coke, was one of the dumbest fucking arguments I ever heard.

The most serious maelstrom to engulf the Cabinet in years came in October, when it became clear that neither Kathleen Sebelius nor her counterparts in the West Wing had adequately prepared for the staggering technical challenges of launching Obamacare. The health and human services secretary was well-liked—she was especially friendly with Jarrett—but many of Obama’s aides still pined for Tom Daschle, the wily former Senate Democrat whom Obama had originally tapped for the HHS job. Daschle, who withdrew from consideration in 2009 over a tax issue, was canny enough to know the way power flowed in Obama’s circle: As a condition for taking the job, he requested a West Wing office so he could keep close tabs on the executive staff. For years, Daschle privately expressed his concerns that Sebelius, who didn’t have the stature to make the same demands, simply wouldn’t have the power to implement the health care program.

Yet, in the end, it may not have been her lack of power that caused all the headaches, but a breakdown in communication and coordination between the White House and Sebelius’s staff. It started with a slow-walk of critical Obamacare rulemaking, a key part of Plouffe’s do-no-harm election-year strategy of minimizing controversial regulatory action. “The number-one culprit was [that] they deferred rulemaking until after the election,” says Mike Leavitt, the Bush-era HHS chief whose face Bob Gates couldn’t quite place. “When they did that, it threw the entire process off. … They were issuing rules in September for implementation in October.” The secretary herself admitted that Obama had been blindsided by the near-meltdown of the program’s web portal, and several administration officials involved in its creation told me they had been alarmed by pre-launch signs of trouble, even offering to tap outside computer experts to help the agency. Sebelius, they say, demurred. That Obama’s staff didn’t press the issue on the president’s signature policy initiative illustrates a paradox central to understanding his governing style: The president who forcefully pushed through the largest expansion of the federal government in generations has been significantly less zealous in overseeing its operation.

Presidencies, at least most of them, tend to end with a whimper, not a whoop. Cabinet secretaries often do rise to greater prominence late in the game, but they can fall harder, too—just ask Sebelius, whose nearly five years of quiet service are now being defined by the Obamacare rollout. Never mind that Congress starved the system of much-needed cash or that Obama and top West Wing staff were kept informed of the program’s progress. Republicans are calling for Sebelius’s head.

Chu knows how she feels. That’s why he’s happy to be back in California, not running a federal agency.

“Going into D.C., I didn’t know the political side. I knew the science and technology side,” recalls Chu, who today professes thinly veiled disdain for the people who “hover around”—the political types who felt little compunction about condescending to a Nobel Prize winner. “It took me a while to realize that one’s own instincts and judgments are sometimes better than the people that have been on the scene for a while.”

2 thoughts on “Locked in the cabinet”