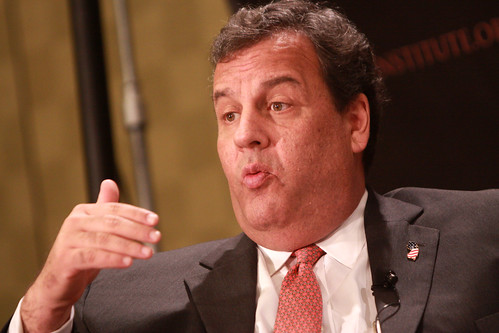 If the anti-Obamacare, anti-Obama everything crowd wants to run, it will have to be third party.  Even then they will have to face the considerable wrath of our soon-to-be national Republican standard bearer who doubles as our governor when he’s in town.

Our job as citizens of the Chris Christie launch site sometimes called New Jersey will be to quietly put up with fewer services, crumbling infrastructure, lower taxes for the very, very wealthy –campaigns don’t run on moonbeams and good wishes, you know –and fall meekly under the Christie public relations spell that what’s good for Utah is good for the launch site, er, New Jersey.

Because the nothing of this year and next and the one after that is going to be a lot of nothing.

No open space spending.  We New Jerseyans love open space. We’ve voted for it over and over again.  The problem is open space plays badly in the West, a key area for our soon-to-be national fearless leader who is our chief state executive when he has the time.  So no open space.

Likewise, the will be none of this environment stuff.  Yes, New Jersey has been America’s leader in cleaning up the environment but Republican moneybags find clean air and water to be invasive government interference.

So we’re going to have to put up with less; less clean air and water that is.

If Christie is to become the leader of the free world after his part time gig in Trenton, there will have to be more guns.  He cannot afford to be soft on the slaughtered children issue.  So no gun laws in New Jersey.  Get ready to become the Wild, Wild East.

After all guns don’t kill kids.  It’s the high speed, soft tipped, fabulously powerful bullets that come out of guns fired by those who are merely exercising their Second Amendment rights that kill kids.  So for the sake of Christie’s ascension, no gun laws.

Also no regional planning.  The funds that are meant to help Sandy victims, compensate farmers in the Highlands, preserve the Pinelands Aquifer, close old landfills in the Meadowlands, stop floods on the Passaic, Millstone, Raritan and other rivers and build a dune barrier at the Shore must now go to balancing the state budget.

Let’s face it, Christie, the guy who does so much for us, when he gets around to it, will never ride down Pennsylvania Avenue on Inauguration Day if doesn’t balance that budget every year.  He can’t raise taxes because that’s a mortal sin for a Republican candidate.  No, in order to make Chris Christie the most exalted man on the planet, we all must make sacrifices.

Nothing is what we must expect.

Nothing in education, nothing on the environment, nothing for open space or infrastructure.  No aid to towns and cities so services must suffer.

You know that pothole up the block.  Learn to live with it.  But giving up all these things will be worthwhile if we can just get what every person in New Jersey wants most of all.

Isn’t it true that above everything else; education, improved commuting, clean air and water and a fair deal for all taxpayers what we all want most is for our glorious lame duck, ever campaigning governor to become the Chief Executive of these United States? Sure it is…