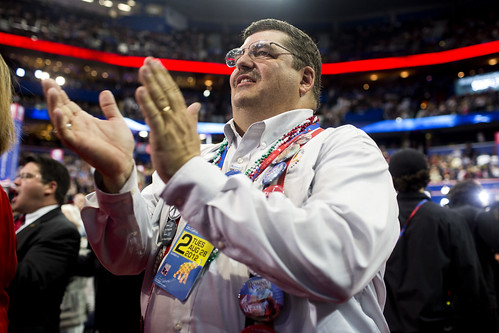 You may not remember how Todd Christie was under investigation by the feds, and got off under unusual circumstances:

When Christopher Christie went on to Seton Hall Law School, Todd Christie followed their father’s path to the financial world, where his high energy and salesman’s bravado allowed him to flourish quickly at the Wall Street trade specialist firm Spear, Leeds & Kellogg. He rose to become chief executive, and when Goldman Sachs bought the company in 2000 for more than $6 billion, Todd Christie’s piece of the deal amounted to about $60 million.

By 2003, however, Spear, Leeds was under investigation on suspicion of cheating customers to benefit the firm. Todd Christie resigned in March 2003, although he says that his departure was not related to the inquiry and that he did not find out until months later that he was among the traders being investigated. When the United States attorney in Manhattan, David N. Kelley, secured criminal indictments against 15 traders at the firmin 2005, Todd Christie was spared, and faced only civil fraud charges along with four other traders.

The company ultimately settled the case, repaying more than $16 million to investors, without admitting or denying wrongdoing. During the campaign, Christopher Christie stated that his brother had done “absolutely nothing wrong,” and in an interview this week Todd Christie said he had been “completely exonerated.” Two of the indicted traders pleaded guilty; the 13 others were ultimately cleared of criminal charges.

The Securities and Exchange Administration settlement Todd Christie signed, dated Oct. 15, 2008, maintains that he carried out hundreds of trades that brought the firm thousands of dollars in profits at its customers’ expense, and had violated stock exchange rules.

While the investigation produced uncomfortable headlines, particularly when Christopher Christie was deliberating whether to run for governor in 2005, the windfall his brother earned on Wall Street certainly helped ingratiate him with party leaders.

Todd Christie began giving tens of thousands of dollars to New Jersey’s Republican county chairmen in 2001, at a time when they were deciding whom to recommend that the Bush administration nominate as the state’s United States attorney. Three months after his brother was sworn in at that job, Todd Christie wrote a $225,000 check to the Republican National Committee.

Democrats have characterized those contributions as a blunt attempt to help his brother become United States attorney, but Todd Christie insists there was no connection between the two.

“I’d always been involved in politics, but since I’d had the good fortune to become successful, I had more to give,” he said.

[…] In the general election, Democrats also tried to make an issue of Todd’s legal troubles with federal regulators and Chrisopher Christie’s decision in 2007 to give a no-bid legal contract, to monitor an orthopedics firm, to David N. Kelley, the former federal prosecutor who had handled the case against Todd Christie’s firm.

Christopher Christie says that the contract was awarded on merit, and that he and Mr. Kelley have never discussed his brother’s case. Mr. Kelley has concurred, saying his decisions in the Spear, Leeds investigation were influenced solely by the evidence.

2 thoughts on “More on Todd Christie”