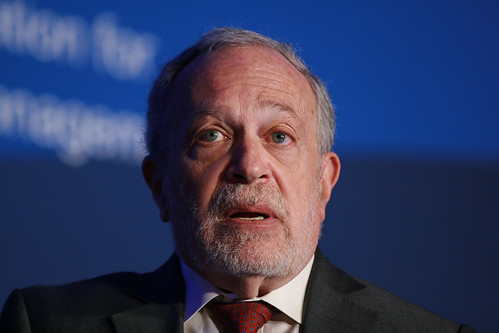 On his Facebook page, Reich says if nobody runs for president with the goals of “broad-based prosperity” and “big money out of politics,” he will:

Connect the dots: Almost all the economic gains are going to the top, which means the rest don’t have the purchasing power to get the economy out of first gear. So unemployment remains high, and most families’ wages continue to drop. The ranks of the poor are growing and almost a quarter of our nation’s children are in poverty. We know how to reverse this (a living wage, better schools and affordable colleges, stronger unions, wage subsidies, no more trickle-down or austerity economics, green jobs) but cannot because our democracy is drowning in big money. Much of it is coming from Wall Street, large corporations, and a few billionaires that want to keep wages down and unemployment high, reduce their own taxes and regulations, and collect corporate welfare.

This is not sustainable. We must get big money out of politics and restore broad-based prosperity. How and when? At the very least, with a candidate for president in 2016 who makes this the centerpiece of his or her campaign and turns it into a national movement, which you and tens of millions of others join. I don’t see any prospect on the Republican side. Then will Hillary Clinton do it? If not, Elizabeth Warren or Bernie Sanders? If no one else will do it, I will.