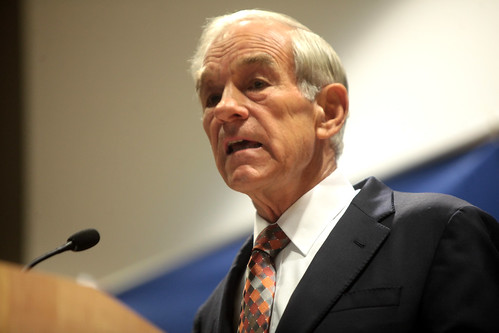 Man, this Iowa deal looks like it’s taking down everybody in the GOP:

Last week’s guilty plea by former Iowa State Sen. Kent Sorenson wasn’t the end of the federal investigation into the 2012 Iowa caucus payola scandal — not by a longshot.

OpenSecrets Blog has learned that FBI agents have been interviewing a slew of witnesses connected to Ron Paul’s presidential campaign and grand jury subpoenas have been issued for email records from campaign officials. And in addition to payments to a Maryland video company that were routed to Sorenson in exchange for his endorsement, OpenSecrets has identified an additional suspicious payment by Paul’s campaign that may be linked to a $25,000 check to Sorenson from a jewelry store connected to a Paul operative.

Sources say two grand juries are looking into the 2012 campaigns of Rep. Michele Bachmann (R-Minn.), whom Sorenson originally endorsed, and Paul, to whom Sorenson switched his support just days before the Iowa caucuses. A number of individuals confirmed to OpenSecrets Blog that they had been interviewed by FBI agents, the grand juries, or both.

In late July, one of the grand juries issued subpoenas for emails and financial transactions between at least seventeen individuals, including Paul, Bachmann and Jesse Benton, who was Paul’s campaign chairman at the time and who resigned as campaign manager for Senate Minority Leader Mitch McConnell‘s (R-Ky.) re-election bid late last week after news of Sorenson’s plea broke. A focus of the probe appears to be Dimitri Kesari, Kesari’s brother and several Maryland audio/video companies they are connected to. Kesari was a Paul operative who later was employed by the McConnell campaign.

An earlier Iowa Senate Ethics Committee investigation found that a Maryland documentary film company called ICT Inc. had paid Sorenson $73,000 in a series of transactions through early 2012. As first reported by OpenSecrets Blog last week, the Paul campaign sent ICT $82,375 in payments that almost exactly match payments to Sorenson. Sorenson’s plea agreement acknowledges that he took payments from a campaign, made to him through a film production company, in exchange for changing his endorsement.

Read on for the rest of the details.

Thanks to Attorney Shawn Sukumar.