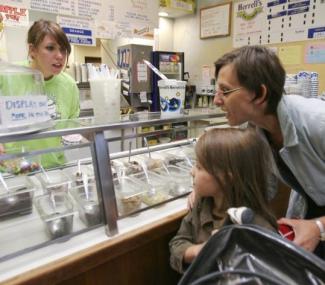 Almost 40 years ago, I was working in my brother-in-law’s pizza and ice cream shop on the Main Line. (In case you don’t know, this is where a lot of the Philadelphia area’s 1% live.) One day, an older guy came in with his two little grandkids, a boy and a girl. The girl was maybe two or three, the boy about four. The boy was standing on his tip-toes, eager to make his choice.

“Can I help you?” I said, leaning over the counter to see him.

As he opened his mouth, the grandfather hauled off and slapped the kid so hard, his head hit the floor. “I said, ladies first!” he roared. Well. I wasn’t about to let this pass.

“How dare you hit that child?” I said, coming from behind the counter to yell at him. I called him a bunch of names (“sick, twisted old fuck” seems to ring a bell) and told him if he hit the kid again, I would call the police.

After he left in a huff, my brother-in-law told me he was the CEO or president (I forget what) of Sun Oil, which was headquartered nearby.

3 thoughts on “Child abuse is cultural”