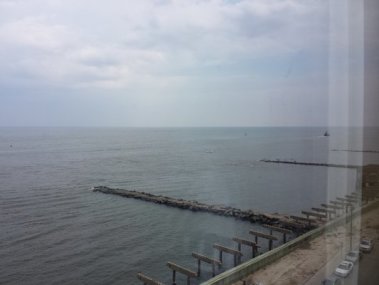 I went down to the restaurant this morning to grab some breakfast, and was sitting across from a middle-aged couple who were probably on their first weekend away together. You could tell they were still new to each other, because they were trying so hard to impress. He was laughing a little too heartily, she was trying too hard to be clever. She pointed to some pilings and talked at great length how they were trying to build a pier on the water, but she was pointing to the remains of the old boardwalk — the part that still hadn’t been rebuilt after Hurricane Sandy.

Then he mentioned something about when he went fly fishing, and she didn’t know what it was. Oops.

God, I hate dating. I really do. You can only tell your fucking story so many times, and when you’re my age, you’ve pushed a lot of back into your subconscious, where it can’t hurt you. Why would you want to dig it out all over again?

Which reminds me of this Barbara Kessler song, “The Date (Making Mountains Out of Molehills)”. Sorry, no video:

If you don’t ask me, I won’t tell you
About the me that came before the one that met you
There’s really not much to say
You’ll probably do most of the talking anyway

And over dinner you’ll tell stories
And I will smile and nod, politely as always
And nothing you say will remind me
But there it will be, like footsteps following behind me

Now you might ask “Is something wrong?”
Oh if I let you you’d find it out before too long
It’s not that I have regrets
I’m just no good at stories that haven’t ended yet

And then you’ll walk me to the front door
It’s always just one moment that decides your evermore
And if you kiss me, or if you don’t
I’ll wonder what that means and if you’ll call or if you won’t

Oh I had pie in the sky dreams
When you catch up with our future
It’s never what it seemed back then
Making mountains out of molehills again.

One thought on “Weekend away”