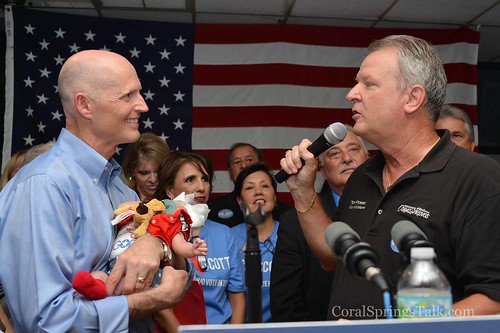 And voters voted for him, anyway:

An accountant who became an FBI whistleblower in a Medicare fraud investigation against a hospital chain spoke out on Monday, saying the company’s former chief executive, Florida Governor Rick Scott, must have known about hundreds of millions of dollars in theft.

“Fraud was brewing in the DNA of Rick Scott’s company from the very beginning, and he was the father of it,” John Schilling said at a news conference organized by the rival gubernatorial campaign of Democrat Charlie Crist.

Scott is facing off against Crist in a close election battle, an expensive and closely watched political race for the nation’s largest swing state.

Scott, a founder of the hospital company Colombia/HCA, was ousted as its chief executive officer in 1997 but not charged in the case. The fraud led to $1.7 billion in federal penalties, which was then the largest healthcare fraud settlement in U.S. history.

The Florida Republican Party shrugged off the accusation, which Scott successfully dealt with in his 2010 election, saying Crist had become desperate in the final four weeks of the campaign.

2 thoughts on “Rick Scott was always a crook”