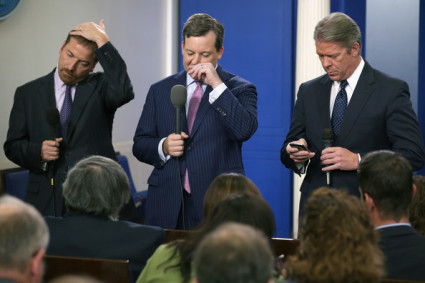 Via Brian Beutler at TNR. You know, the thing I used to love about being a reporter was that I was actually paid to delve into wonky topics like insurance. Nowadays, reporters just worry about their hair:

But here was McConnell, sitting at arm’s length from Grimes, caught in a massive contradiction about the fate of hundreds of thousands of people’s health benefits, and the media still yawned it off.

How to explain this? The answer lies, at least in part, with the political press corps’ general indifference to policy, and its aversion to speaking fluently about substantive debates.

There’s a more general sense in which the media is mostly interested in comments or blunders that can alter the prevailing currents of a campaign. As the Washington Post’s Paul Waldman put it, “the standard being employed isn’t ‘Does this statement reveal something genuinely disturbing about this candidate?’ but rather, ‘Is this going to be politically damaging?’”

What’s particularly frustrating about McConnell’s irreconcilable ACA claims is that they would be politically damaging if the political press corps understood the nature of the deception. But unlike Grimes’ comments, which are just plainly absurd, laying McConnell bare requires a somewhat confident understanding of health policy and the system Obamacare promulgated in Kentucky. To see why, start with this tweet, from McConnell’s campaign manager.

You don’t need to know anything about insurance or the ACA’s basic structure to know that Grimes isn’t upholding any sacred principle when she refuses to say she voted for Obama. But you need a passing familiarity with both to identify the above as obfuscation rather than a sincere attempt to explain the apparent contradiction in McConnell’s argument.

During the debate, McConnell said he’d be “fine” with it if Kentucky decided to hold on to Kynect if and when Republicans repeal Obamacare. The subtext of Holmes’s tweet is that Kynect would simply become a hub for the kinds of plans that existed in Kentucky before Obamacare. After all, it’s true there was an insurance market (a non-group market) before there was Obamacare. It could follow that McConnell’s proposition is perfectly reasonable.

But there were also websites before there was Kynect. One of those websites is a Kynect-like exchange called ehealthinsurance.com. Yet somehow, before Obamacare and Kynect came along, it wasn’t processing half a million Kentuckyians a year. The uninsurance rate in Kentucky was extremely high and showed no signs of falling on its own.

That’s because prior to Obamacare, the non-group market was dysfunctional. It excluded and priced out the sick and poor. It offered decent plans to young people who posed minimal health risks, but also sold junk policies that left people who believed they were doing the responsible thing exposed to medical bankruptcy.

It took Obamacare (and, thus, Kynect) to transform that market into something that proved inviting to half of Kentucky’s uninsured population almost overnight. Take away Obamacare, and Kynect might still exist as a website. But it’d be about as useful to Kentuckians as ehealthinsurance was prior to last year. Not totally useless, perhaps, but dramatically diminished and completely superfluous.

You need to know all this if, as a political reporter, you’re going to dismiss the McConnell camp’s spin and call him out as clearly as you (presumably) called out Grimes. Likewise, when McConnell implies that Kentucky could simply replicate the ACA’s private insurance expansion and its Medicaid expansion, you need to know that Kentucky probably couldn’t—and certainly wouldn’t—ever do it on its own. McConnell is suggesting that Kentuckians replace a valuable, paid-for federal benefit with one that would impose steep new burdens on the people of the state alone, knowing it’ll never happen.

Once you grasp it all, then it becomes obvious why McConnell’s contradiction is theoretically so dangerous. He isn’t just painting a shiny gloss on a controversial position. He’s exploiting the public’s confusion over it, playing voters for fools by peddling absurdities. Something that can come to define a campaign just as easily as Grimes’ political cowardice might ultimately come to define hers.

This isn’t quite as simple as pillorying a candidate who won’t say whom she voted for in the last presidential election. But it isn’t that hard either. And it’s unfathomable to me that more campaign nerds can’t be bothered to take a moment and figure it out.

One thought on “Your librul media”