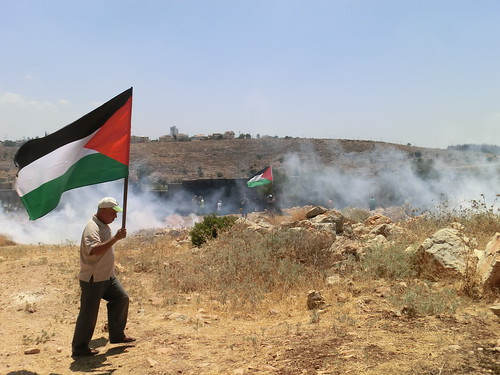 They must hate witnesses:

JERUSALEM (AP) — Two photographers, including one working for The Associated Press, were struck by rubber-coated bullets fired at close range by an Israeli border policeman. Neither photographer was seriously hurt in Sunday’s incident, which came during protests that followed the funeral of a 14-year-old Palestinian boy killed in a clash with Israeli soldiers.

It was the latest incident in which journalists have been injured by tear gas, stun grenades and rubber bullets fired by border police, a paramilitary unit often sent in to quell violent demonstrations. AP said it planned to protest to the Israeli military, police and government. John Daniszewski, senior managing editor for international news, said the shooting showed “reckless disregard for the safety of journalists who were doing their job in a lawful way.”

AP photographer Majdi Mohammed said he was among several photographers who took up positions near the protests in the West Bank town of Silwad. Mohammed said they were not ordered to leave and the area had not been declared closed.

As he was taking pictures, an armored jeep pulled up behind him, a border policeman stepped out and fired directly at him from a distance of 10 to 20 meters (10 to 20 yards), Mohammed said.

One thought on “Israeli cop fires on AP photographers”