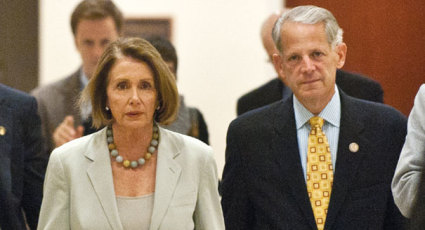 What the what? Pelosi offered Steve Israel ANOTHER term at the DCCC? She’s gotta go, too:

Sleep-deprived and smarting from what he called “an ugly night for Democrats at all levels,” Israel said one lesson from the midterms that’s essential in 2016 is identifying and contacting voters, early and often.

But Israel won’t be preparing the DCCC for that. He said Wednesday he turned down a request by House Minority Leader Nancy Pelosi to return as chairman for a third election.

Instead, he said he is talking with her about staying in House Democratic leadership.

Looking back on his tenure at the DCCC, he points out he won eight House seats for Democrats in 2012 and said he prevented losses Tuesday that “could have been a lot worse.”

See, that’s our standard for victory under Blue Dog, “Center Aisle” Steve Israel: “Hey, it could have been worse!”

Still, Republicans exceeded their goal of winning a net 12 seats from Democrats by three, giving them their biggest House majority since the 1940s. The DCCC lost 11 of the 24 Democratic seats they spent millions of dollars to defend, and picked up only a few Republican seats.

Ros-Lehtinen, a close friend and political crony of DCCC head Debbie Wasserman Schultz, who has protected her in the past, was a member of Steve Israel’s Center Aisle Caucus. Charlie Dent was a member of the same centrist caucus composed of Blue Dogs and other Wall Street-owned Democrats and relatively mainstream conservative Republicans. One of the premises is that the members don’t oppose each other– which was certainly a good enough reason for Nancy Pelosi to have not made him head of the DCCC. But she did. And tonight she’s reaping the whirlwind– and so are more rational Democrats and the American people.

When David Broder first wrote about the determinedly centrist Congressional Center Aisle Caucus in 2005, he almost ejaculated for joy on the editorial page of the Washington Post over the sheer civility of the project. I wonder why they didn’t make him an honorary member. Broder claimed there were 47 invited members (which later grew to 60), roughly equally split between the two parties, although that membership roll isn’t readily available anywhere, almost like it’s being hidden. They meet, or met, secretly, in a Chinese restaurant two blocks from Capitol Hill; no joke. The caucus was founded by Republican Tim Johnson (IL) and the-Blue Dog… Steve Israel (NY) with the stated purpose of bypassing Congress’ partisan ways.

Applicants for membership weren’t admitted unless they recruited companion members from the opposite party. Caucus members avoided lightning-rod issues and focused only on areas that most likely would produce agreement. Under one unwritten bylaw, members vowed never to engage in political campaigns against other members. That’s nice… but does it make sense to appoint the person who came up with that chairman of the DCCC? I’ll answer that for you– NO! These are the exact candidates the DCCC should be going after… but regardless of how vulnerable they are, Israel keeps the DCCC off their backs one way or the other. In a rational world, Ileana Ros-Lehtinen would have been a top tier DCCC candidate, but Steve Israel doesn’t live in a rational world; he lives in a Center Aisle world and ignores the fact that Ros-Lehtinen is in a blue district that Obama won– and by a way stronger margin than just about all of Israel’s targeted districts. But Ileana gets a reelection free-pass from Israel and Debbie Wasserman Schultz.

Last year Wasserman Schultz was complicit in recruiting a cardboard candidate, Manny Yevancey, who no one ever heard of, who raised zero dollars and who campaigned exactly zero days. His only job was to occupy the Democratic ballot slot so no one else could run against Wasserman Schultz’s and Israel’s BBF.

There are 21 seats like this in the House, winnable seats Steve Israel willfully ignored, even if they were much easier than impossible targets in deep red districts where he ran his handpicked Blue Dogs and New Dems. All of these incumbents represent districts where Obama won in 2008 and/or 2012 but where Israel has refused to back the grassroots local candidate or has frightened off anyone from running against his Republican pals.

2 thoughts on “Time for Pelosi to go, too”