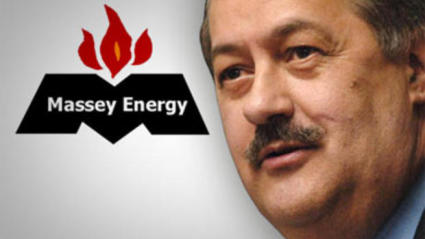 They say the arc of the universe bends toward justice, and I’m glad the universe finally got around to indicting Don Blankenship:

Don Blankenship, the longtime chief executive of Massey Energy, was indicted today on charges that he violated federal mine safety laws at the company’s Upper Big Branch Mine prior to an April 2010 explosion that killed 29 miners.

U.S. Attorney Booth Goodwin this afternoon informed representatives of the families of the Upper Big Branch Mine Disaster victims that a four-count indictment had been handed up by a federal grand jury charging Blankenship.

The indictment alleges that Blankenship conspired to cause routine, willful violations of mandatory federal mine safety and health standards at Upper Big Branch during a period from Jan. 1, 2008, to April 9, 2010, according to a notice Goodwin’s office sent to the families.

The notice also said that the indictment alleges Blankenship was part of a conspiracy to cover up mine safety violations and hinder federal enforcement efforts by providing advance warning of government inspections. The indictment also alleges that, after the explosion, Blankenship made false statements to the U.S. Securities and Exchange Commission about Massey’s safety practices prior to the explosion, the notice to families says.

The indictment comes after a more than four-year investigation by Goodwin that began following the mine disaster on April 5, 2010, but expanded to examine a troubled safety record that critics have long argued put coal production and profits ahead of worker protections.

Assistant U.S. Attorney Steve Ruby has led an unprecedented government effort to link major safety lapses at Upper Big Branch and other Massey mines up the corporate ladder to Blankenship, who was known for keeping a firm grip on every aspect of Massey’s operations during nearly two decades at the company’s helm.

Blankenship has previously denied any wrongdoing, insisted that Massey put the safety of its miners first, and promoted his theory that the Upper Big Branch explosion was fueled by an uncontrollable flood of natural gas that inundated the Raleigh County mine.

“If they put me behind bars … it will be political,” Blankenship wrote in a May 2013 article posted on a blog he has used to defend his record and attack his critics.

Two government and two independent investigations, though, blamed the Upper Big Branch deaths on a pattern by Massey Energy of violating federal standards concerning mine ventilation and the control of highly explosive coal dust, both of which set the stage for a small methane ignition to turn into a huge coal-dust-fueled explosion.

Those investigations all generally agreed that the explosion erupted when the mine’s longwall machiner shearer cut into a piece of sandstone. The resulting spark, investigators said, ignited a pocket of methane gas. Investigators concluded that worn-out bits on the cutting shearer contributed to the explosion, while missing water sprays allowed the ignition to spread. Illegal levels of coal dust had not been cleaned up, providing fuel that sent the blast ricocheting in multiple directions throughout more than two miles of underground tunnels, investigators said.

“While violations of particular safety standards led to the conditions that caused the explosion, the unlawful policies and practices implemented by [Massey] were the root cause of the tragedy,” the U.S. Mine Safety and Health Administration concluded in its report on Upper Big Branch. “The evidence accumulated during the investigation demonstrates that [Massey] promoted and enforced a workplace culture that valued production over safety, including practices calculated to allow it to conduct mining operations in violation of the law.”

One thought on “Now convict the bastard”