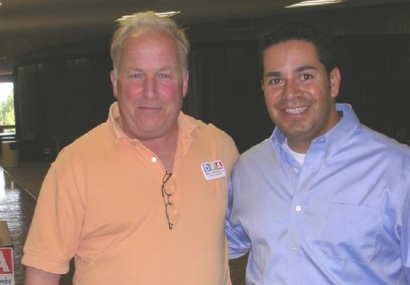 This is certainly a pleasant surprise: Rep. Ben Ray Luján is a really good guy, a solar power activist and a strong progressive in a state that needs more. He was Democracy For America-endorsed when he first ran in 2008, and won; he’s a product of DFA’s candidate training. That’s what Howard Dean talked about, folks — getting involved and running for office. I look forward to seeing him in action:

Luján, who is 42 years old and completing his third term in the House, will succeed New York Rep. Steve Israel, who is departing the committee after two cycles. Influential liberals, including union leaders and wealthy donors, reacted with a mix of surprise and mild approval to the Luján pick, which came after many of them had quietly mounted a campaign to pressure Pelosi to select Maryland Rep. Donna Edwards, a favorite of the party’s progressive wing.

As his party’s chief political strategist in the lower congressional chamber, Luján will have a hard task. After losing at least 12 seats in the 2014 midterms, Democrats are deeper into the House minority than at any point since 1931, when Herbert Hoover was president. Democrats last wielded the speaker’s gavel in 2010.

Luján, a leader in the Congressional Hispanic Caucus, is the son of the late Ben Luján, a onetime speaker in the New Mexico state House of Representatives. Prior to winning a seat in the House in 2008, Luján was a member of the New Mexico Public Regulation Commission.

Luján has a “bold vision and determined leadership to deliver wins in difficult districts,” Pelosi said during a news conference Monday.

The newly selected chairman, meanwhile, described the moment as “joyous” and said he “couldn’t get momma off the phone.”

3 thoughts on “Rep. Ben Ray Luján is a surprise pick to chair DCCC”