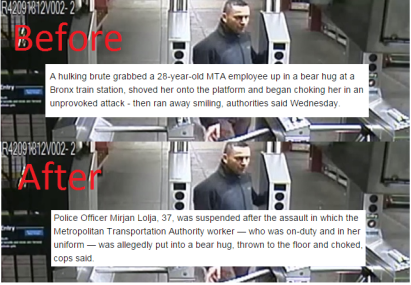 Just before the holidays, on December 23, a man in a windbreaker and sneakers got into a verbal altercation with an on-duty, uniformed female transit employee that escalated into a physical assault. According to police, the man put the 28-year-old woman into a bear hug and slammed her to the ground where he began choking her. Thankfully, another employee rushed to her aid and the assailant fled.

The next day, the police released images of the attacker and asked the public for help identifying him. The New York Daily News ran the story in their typically sensationalist way. They described the man as a “brute” and a “thug” and described the incident in lurid detail and begged for readers to help ID the coward who attacked the woman and “ran away smiling.”

The problem? The man turned out to be an off-duty NYPD police officer and the New York Daily News, like almost every other media outlet in the country — liberal or conservative — has a completely different set of rules for covering police officers accused of committing a crime. By the next day, the story had been cleaned up.

Shrill, an eagle-eyed writer for Wonkette, noticed the blatant change in tone from one day to the next after the paper learned that this attacker was no random guy, but actually a police officer. The change in title and opening paragraph say it all.

Shrill aptly sums up the differences:

“Notice anything? Gone is the evocative “thug” in the headline and the “hulking brute” of the lede, and the sensationalism of the label of an “unprovoked” attack, replaced by plainspoken and bare nouns. Gone, too, is the directness of the active voice, replaced by a circumspect passive voice, accompanied by the (necessary) lawyerly “allegedly.” The callousness of him smiling has been dropped, too, demoted to the second paragraph. This is no surprise — it’s just an example of the subtle way in which our media defers to and genuflects before law enforcement, shaping and coloring the narrative in their favor.”

2 thoughts on “Notice anything?”