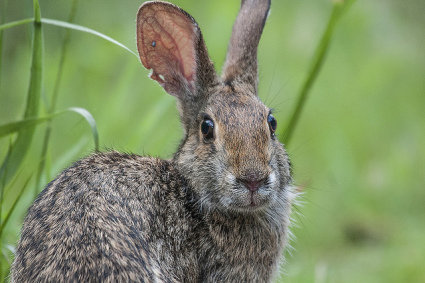 Is it possible to be paranoid and arrogant as hell at the same time? Sure it is, if you’re a cop.

Swamp Rabbit asked me how I could say such a thing. I told him to check out the NYPD goons who turned their backs to dis New York City Mayor Bill de Blasio at the funerals of their two slain comrades. As if the mayor somehow inspired the loony who killed the cops. As if he was expressing solidarity with cop killers when he addressed the concerns of people who feel victimized by the city employees who’ve sworn to protect them.

The rabbit tossed some twigs into the wood stove and said, “Git a grip, Odd Man. Screamin’ at me ain’t gonna stop cops from killin’ guys who sell loosies, or bring back the kid with the toy gun who got blasted by some Barney Fife in a playground.”

I slammed the wood stove door and said, “I know that, you stupid rodent. All I’m saying is it shouldn’t surprise anybody when cops turn their backs. That’s what most cops do.”

The rabbit took a swig of Wild Turkey and tried to pass the bottle to me. I shook him off. He said, “I still don’t get your drift, Odd Man.”

“Well, get this. You ever call the cops when there’s a domestic dispute? When your bike gets stolen or your car window smashed? When somebody breaks into your shack and walks off with your flat-screen? When some nut job down the block threatens to stab your first-born? Cops take two hours to show up. Then they laugh at you. Then they threaten to lock you up if you make a fuss. Then they turn their backs and walk.”

He accused me of exaggerating. “You’re just talkin’ about that rotten neighborhood in Philly where you grew up. Most people like havin’ a police department.”

I threw an empty can of black-eyed peas at him. “Cops aren’t a department, they’re a tribe. They’re like outlaw motorcycle gangs. They don’t rat on their brothers. They watch out for each other. They think in terms of us versus them. They hurt people who mess with them. Half the time, they lock up the wrong people. They exist outside the law.”

“You make it sound like all cops are bad guys,” the rabbit said. “That’s like sayin’ all bus drivers is bad.”

“You’re right, rabbit, there’s good and bad in all professions. But bus drivers can’t shoot people or strangle them just for looking at them funny.”

“Right again,” I said. “Cops wear badges and get great benefits and pensions and can retire before their hair turns gray. Bikers don’t get benefits.”

I would have kept my rant going, but the rabbit turned his back on me and hopped out to the swamp.

2 thoughts on “Outlaw bikers with badges and benefits, aka NYPD”