Everything in life is context, and when it comes to Martin Luther King Jr. (happy birthday, Dr. King!), context is almost always lacking.

Over the past decades, we’ve seen conservatives try to claim his legacy as his own — you know, the same guy they called a communist and an agitator.

“He was against all policies based on race,” says Peter Schramm, a conservative historian. “The basis of his attack on segregation was ‘judge us by the content of our character, not by the color of our skin.’ That’s a profound moral argument.”

Taylor Branch, the Pulitzer Prize-winning author of a trilogy on King, says some conservatives are invoking a phantom version of King to avoid dealing with contemporary racial issues.

“They want to claim they understand Dr. King better than Dr. King did,” says Branch, author of “Parting the Waters.”

[…] One of the first leaders to invoke King’s message in support of conservative ideas was Ronald Reagan, according to Stephen Prothero, who spotlights that moment in his book “The American Bible,” which examines the most famous speeches and texts in American history. 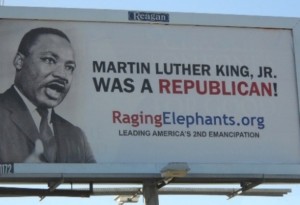 In June of 1985, Reagan cited King’s “content of our character” line from the “I Have a Dream” speech to argue in a speech opposing affirmative action that King’s vision of a colorblind society would not include racial hiring quotas.

Most historians think King was getting more radical, not conservative, at the end of his life.

King concluded that racism wasn’t the only problem: War and poverty were the others. He came out against the Vietnam War. He called for the nationalization of some industries and a guaranteed annual wage.

His most audacious plan was a forerunner of today’s Occupy Movement. By 1968, King was preparing to lead a “Poor People’s Campaign” to Washington. A coalition of poor blacks, Native Americas, Latinos and whites from Appalachia would occupy Washington and force the government to take money spent on Vietnam and use it instead to combat poverty. The campaign muddled on after King’s assassination, but quickly fell apart without his leadership.

In a documentary entitled “Citizen King,” the leader is shown speaking to a church audience, as he prepared his nonviolent army of poor people for Washington.

This 2013 article in the Hill is headlined “Conservative blacks irritated with liberal flavor of MLK march anniversary>” And then, they interview both of them: Mia Love and Herbert Cain! (That was a joke, son.)

Mia Love, the Republican mayor of Saratoga Springs, Utah, is black and was born in Brooklyn, N.Y.

She contends that modern-day civil rights activists, in league with the Democratic Party, de-incentivize personal responsibility and economic independence.

“I believe Dr. King would be saddened by the way that some of these leaders are telling Americans that they are victims and their only hope for a better future is a government handout,” she said. “It does nothing but keep black Americans dependent.”

That’s just not true. The man was a radical! He called for a guaranteed annual income, reparations to the descendants of slaves, and an end to war and American empire. He railed against war crimes! Are these people crazy?

It’s a tribute to the prescient power of Dr. King’s legacy that they are trying so hard to distort it.