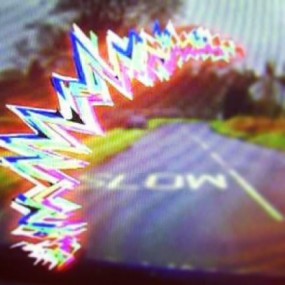 I was reading before I went to sleep last night when I saw a migraine scotoma appear. (See above picture.) I thought, “Oh shit,” turned off the light and went to sleep. But it was hard to sleep, because the scotoma was so much brighter and more colorful than usual.

I woke up two hours later — and the fucking scotoma was still there! After obsessing for an hour or two about the possibility that Lyme spirochetes are indeed invading my brain, I finally get back to sleep.

So I get up this morning, and a few minutes after I sit down at my desk, the damned thing is back. Which means I pop an Excedrin migraine pill and lie down with my eyes closed. After 20 or so minutes, it goes away. (I time it by how many songs played on the radio, since I can’t see.)

But when I went back to my desk, I noticed right away that my vision had changed. You know how when you lose your glasses, and you find an old pair, and you realize how much stronger your current prescription must be? Like that. Which is a little scary, since my computer glasses are pretty strong to begin with.

I know enough about these ocular migraines to know that, under some circumstances, doctors believe they’re more like mini-strokes. Until today, I haven’t had any of those symptoms. But vision change after a migraine isn’t such a good sign, so I contacted Penn to get an appointment with a neuro-ophthalmologist. (Maybe I should just call Rand Paul.)

And this is what I hate about getting old. You never really know which things to pay attention to.

3 thoughts on “The main thing I hate about getting old”