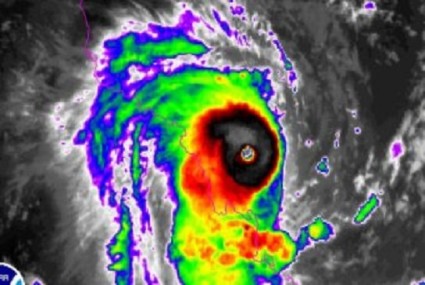 Cyclone Marcia, a Category 5 storm, hit the coast of Queensland, Australia yesterday. Nary a mention in U.S. media, and certainly no talk of all these RECORD-BREAKING WEATHER EVENTS we’re having lately. Hmm.

Authorities say it’s now too late for the 30,000 Queenslanders in the direct path of this category-five storm to evacuate, AAP reports.

The core of the cyclone is now starting to affect parts of the central Queensland coast, with the town of Yeppoon to feel the full brunt of its winds and its destructive storm surge, which could destroy low-lying homes.

Marcia is packing winds gusting to 285km/h, a force that’s expected to destroy older homes in the area that have not been built to modern cyclone standards.

Premier Annastacia Palaszczuk said the 30,000 people who live in Yeppoon and surrounding communities are most at risk.

But the threat extends to a vast swathe of the coast, with a 2.6-metre storm surge expected on top of the normal high tide level.

Rockhampton, south of Yeppoon, is also in the firing line with Marcia still expected to be a strong category three cyclone when it hits there, after tracking south over land.