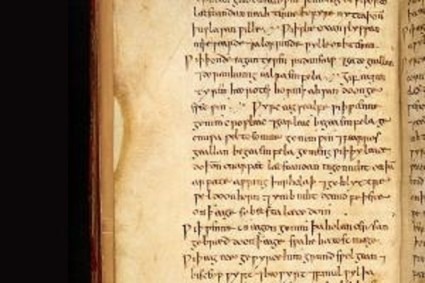 I just love this:

Take cropleek and garlic, of both equal quantities, pound them well together… take wine and bullocks gall, mix with the leek… let it stand nine days in the brass vessel…

So goes a thousand-year-old Anglo Saxon recipe to vanquish a stye, an infected eyelash follicle.

The medieval medics might have been on to something. A modern-day recreation of this remedy seems to alleviate infections caused by the bacteria that are usually responsible for styes. The work might ultimately help create drugs for hard-to-treat skin infections.

The project was born when Freya Harrison, a microbiologist at the University of Nottingham, UK, got talking to Christina Lee, an Anglo Saxon scholar. They decided to test a recipe from an Old English medical compendium calledBald’s Leechbook, housed in the British Library.

Some of the ingredients, such as copper from the brass vessel, kill bacteria grown in a dish – but it was unknown if they would work on a real infection or how they would combine.

Sourcing authentic ingredients was a major challenge, says Harrison. They had to hope for the best with the leeks and garlic because modern crop varieties are likely to be quite different to ancient ones – even those branded as heritage. For the wine they used an organic vintage from a historic English vineyard.

As “brass vessels” would be hard to sterilise – and expensive – they used glass bottles with squares of brass sheet immersed in the mixture. Bullocks gall was easy, though, as cow’s bile salts are sold as a supplement for people who have had their gall bladders removed.

After nine days of stewing, the potion had killed all the soil bacteria introduced by the leek and garlic. “It was self-sterilising,” says Harrison. “That was the first inkling that this crazy idea just might have some use.”

A side effect was that it made the lab smell of garlic. “It was not unpleasant,” says Harrison. “It’s all edible stuff. Everyone thought we were making lunch.”

The potion was tested on scraps of skin taken from mice infected with methicillin-resistant Staphylococcus aureus. This is an antibiotic-resistant version of the bacteria that causes styes, more commonly known as thehospital superbug MRSA. The potion killed 90 per cent of the bacteria.Vancomycin, the antibiotic generally used for MRSA, killed about the same proportion when it was added to the skin scraps.

2 thoughts on “This is so cool”