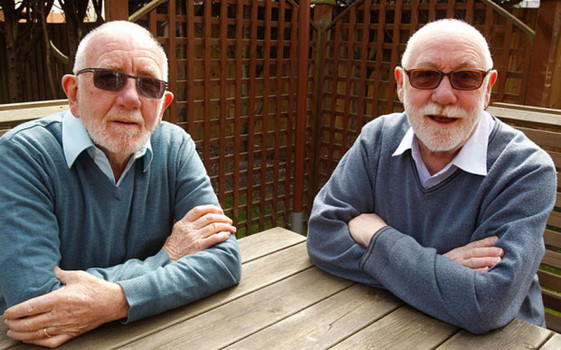 The story of two strangers who look like twins is topping headlines across the globe because the similarities between Neil Richardson, 69, and John Jemison, 74, go beyond their physical appearance. As reported by the Telegraph on March 31, although the two men were complete strangers, they lived in the same neighborhood, even went to the same college in Chelsea and both worked as religious knowledge teachers.

They had never heard of each other until they met by chance on the bus. Last week, Richardson took a bus to visit an exhibition on the Magna Carta in the British Library in London. When Jemison stepped on the bus, Richardson suddenly understood why everyone had been addressing him by the wrong name. The two men look exactly alike, but they are not family. Jemison said: “I didn’t instantly notice our resemblance but as I boarded the bus, Neil greeted me with ‘Are you John Jemison?'”I was distracted with the thought, ‘Oh dear, it’s someone else who wants me to do something.’

The two former strangers spoke yesterday with British media sources regarding the strange coincidence: “Twice a month I would have someone pass me in the street and say ‘Hello John,’” Richardson said. “I brushed it off at the time but then I realized that the cafe owner always referred to me as John as well.“One day I took him to one side and said, ‘Can I have word with you please?’

The two men met up for lunch and this is when hey realized they have much more in common than just looks. The Telegraph wrote that both studied at the College of St Mark and St John in Chelsea in the Sixties, but never met and went on to become RE teachers. Mr Jemison taught at Braintree’s Alec Hunter and John Bunyan schools, before becoming head of Silver End Primary school, while Mr Richardson became a priest.