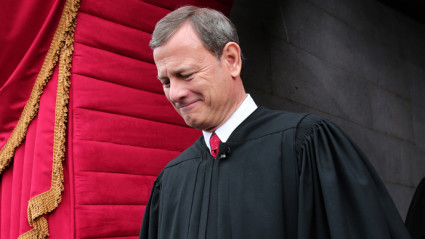 What does one say to that lack of self-awareness?

On Wednesday, a 5-4 Supreme Court held in Williams-Yulee v. Florida Bar that states may “prohibit judges and judicial candidates from personally soliciting funds for their campaigns.” It was a small but symbolically important victory for supporters of campaign finance laws, as it showed that there was actually some limit on the Roberts Court’s willingness to strike down laws limiting the influence of money in politics.

Chief Justice John Roberts’s opinion for the Court in Williams-Yulee is certainly better for campaign finance regulation than a decision striking down this limit on judicial candidates — had the case gone the other way, judges could have been given the right to solicit money from the very lawyers who practice before them. Yet Roberts also describes judges as if they are special snowflakes who must behave in a neutral and unbiased way that would simply be inappropriate for legislators, governors and presidents:

States may regulate judicial elections differently than they regulate political elections, because the role of judges differs from the role of politicians. Politicians are expected to be appropriately responsive to the preferences of their supporters. Indeed, such “responsiveness is key to the very concept of self-governance through elected officials.” The same is not true of judges. In deciding cases, a judge is not to follow the preferences of his supporters, or provide any special consideration to his campaign donors. A judge instead must “observe the utmost fairness,” striving to be “perfectly and completely independent, with nothing to influence or controul {sic} him but God and his conscience.” As in White, therefore, our precedents applying the First Amendment to political elections have little bearing on the issues here.

2 thoughts on “Isn’t that the way it’s supposed to work?”