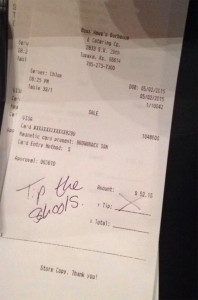 The governor of Kansas was taken to school by a waitress who objected to his controversial school funding program – and her tip to Gov. Sam Brownback went viral.

Chloe Hough was working her last shift at Boss Hawg’s Barbeque in Topeka when she sent out an urgent message to her friends on Facebook : “You guys 911 emergency. It’s my last shift and I am waiting on our governor. What should I say to him. This is not a test. Go.”

When Brown finished his dinner Saturday night, Hough presented him with his credit card slip for $52.16 – with the tip line marked with a large “X” and handwritten instructions for the governor: “Tip the schools,” reported KSNT, the NBC affiliate in Topeka.

“It was my last shift at the restaurant as I had quit so it worked out nicely,” Hough told KSNT.

Hough posted a picture of the slip on her Facebook page with the caption “Mic Drop.”

In March, Brownback instituted a change in funding Kansas public schools, switching to block grants for two years instead of relying on complicated formulas to determine each district’s share. The grant program also freezes funding for two years.

One thought on “Here’s your tip, pal”