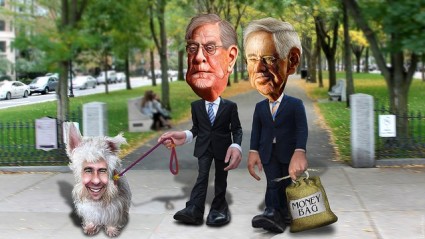 Though he has yet to officially declare his bid for president, Wisconsin Governor Scott Walker is frequenting early primary states and hinting at what he would do if elected to the White House. In a recent interview with Radio Iowa, Walker said he would champion a federal version of the controversial ‘right-to-work’ law he signed earlier this year.

“As much as I think the federal government should get out of most of what it’s in right now, I think establishing fundamental freedoms for the American people is a legitimate thing and that would be something that would provide that opportunity in the other half of America to people who don’t have those opportunities today,” he said.

With Walker’s blessing, Wisconsin became the 25th state to pass a so-called ‘right-to-work,’ which bans workplaces that have voted to unionize from collecting mandatory dues to support their collective bargaining efforts. Since then, the state’s union membership has been decimated. Two-thirds of the state’s members of American Federation of State County and Municipal Employees (AFSCME) have dropped out, causing membership to plummet from 63,000 to less than 20,000.

Governor Walker’s pledge to bring this policy to the “other half of America” would exacerbate the existing decline in union membership that began in the late 1960s and sped up in the 1980s, and would hit hardest the country’s few remaining labor strongholds: Kentucky, New York, California, Alaska and West Virginia. With the sharp falling off of union membership comes increasing economic inequality and a drop in middle class incomes. Several studies have also found that ‘right-to-work’ laws result in lower wages and a lower likelihood of health care and pensions for all workers, both union and non-union.

As new ‘right-to-work’ bills come up for debate in Maine, Illinois, Ohio and other states, Walker vowed to aid those efforts if elected in 2016 by governing the US as he has governed Wisconsin.

“Really what we did wasn’t just fight unions,” he said. “It was fight the stranglehold that big government special interests had on state and local governments. I think in Washington we need that even more.”