Urban black kids have drifted away from baseball. Major League Baseball started a foundation to being baseball back to the inner cities, but what’s really needed is a black baseball-loving role model. 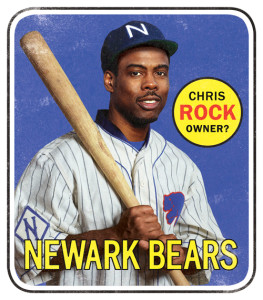 Describing himself as “an endangered species — a black baseball fan,” Rock argued that the game of baseball has stubbornly alienated African Americans: “Every team is building a bullshit, fake-antique stadium that’s supposed to remind you of the good old days — you know, the good old days with Ruth, DiMaggio, Emmett Till.” Even as the world has sped up, he contends that the sport has slowed down, operating under an outdated unwritten code that discourages the kind of flamboyance exhibited in professional basketball and football, sports that are more popular among blacks.

And blacks are staying away in droves, on the field and in the stands.

“I don’t care about any of this as a black guy, I care about this as a baseball fan,” he said. “We don’t really need baseball, but baseball needs us. The fact is, black America decides what’s hot and what young people get excited about.”

Judging from the social-media shares and the YouTube views — nearly 750,000 of the latter at last count — Rock’s rant scored.

Something about the whole thing troubled me, though. Rock takes the position that baseball needs to change its ways. On that score, I completely agree. At the same time, his argument hinges on the fact that he needs baseball.

Baseball could certainly use him.

So writer Tom Finkel wrote him a letter:

Dear Chris Rock,
I saw you on YouTube the other day talking about how blacks and baseball aren’t a good match any more. I’m referring to the bit you did on Bryant Gumbel’s show, the one that starts, “I’m an endangered species: a black baseball fan.”

Vintage Chris Rock–true and sad and funny. (Granted, it’s no “Big Piece of Chicken,” but fatherhood will always
hit closer to home than baseball.) And it nagged at me the rest of the day.

Then it dawned on me: You, Chris Rock, are in an ideal position to address baseball’s relationship with blacks–
and, while you’re at it, give a huge boost to a hard-luck city.

All you have to do is…buy the Newark Bears.

True, purchasing a business in Newark, New Jersey, doesn’t exactly scream “Shrewd move!” But you have several
things working in your favor here.

First and foremost, the Newark Bears are for sale. Just go to the team’s homepage (newarkbears.com) and see for
yourself: “Serious inquiries only!” Fact is, the current owner folded his tent in 2013 after the team went 37-63, playing in front of 21,288 fans. That’s 21,288 total. I think it’s fair to assume we’re working with a motivated seller.

Speaking of motivation, Newark is the seat of Essex County, proud owner of Bears & Eagles Riverfront Stadium.
When I say “proud,” I mean “desperate.” The county built the ballpark for the Bears back in 1999 for $34 million.

Residents will be paying off the debt for the next fifteen years.

But the Bears haven’t always been a loser. Far from it. The franchise came into existence in 1917. In the early
’30s the club was purchased by Jacob Ruppert, a beer baron who owned another local team you may have heard of, the New York Yankees. As the Yankees’ top farm team, the Bears boomed. The ’37 squad is said to have been one of the best minor-league teams of all time.

And Newark saw its share of stellar Negro League ball. From 1936 through 1948 the Bears shared a stadium with
the Newark Eagles. The great third baseman Ray Dandridge was an Eagle. So was Monte Irvin, the pride of East Orange.

And Larry Doby, who grew up in Paterson, went on to break the color barrier in the American League. Hall of Famers all.

Did I mention you’re Chris Fucking Rock? You wouldn’t be the first comedian to own a ballclub. You wouldn’t even
be the first “Saturday Night Live” alum. Bill Murray owns a piece of several teams. Do you know him? (I’d love to meet him!)

I’m not the preachy type. I’m not suggesting you invest in a baseball team in a downtrodden city to sell yourself as a role model. I’m suggesting you do it to make the kind of impact on baseball that you want to see. (It’s not like you haven’t done this before at your day job. Just ask Wanda Sykes, J.B. Smoove, and Leslie Jones.)

You want more black people to come out to baseball games? You get to map out the marketing plan–and you’re
Chris Fucking Rock!

You say: “Maybe if baseball gets a little hipper, a little cooler, just a little more black, the future can
change.”