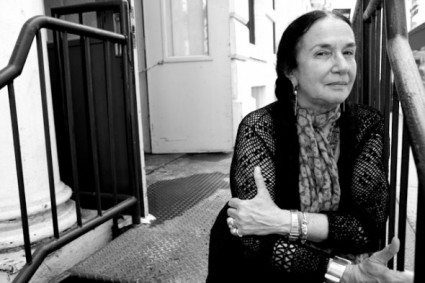 Mary Ellen Mark, an artist known for her incredible humanist photography, passed away Monday in New York City. A rep confirmed the news Tuesday morning. She was 75.

Mark was born (March 20, 1940) and raised in Elkins Park. She graduated from Cheltenham High School (“I was head cheerleader,” she told the Inquirer’s Stephen Rea in 2008). In 1962, she received a bachelor of fine arts in art history and painting from the University of Pennsylvania, and a master’s in photojournalism in 1964 from Penn’s Annenberg School of Communication. She would return to the local institution to receive honorary doctorates in fine arts in 1992 and 1994.

Mark said she got her big break while working for a Penn alumni magazine. On assignment at Rosemont College, she met Pat Carbine, then managing editor of Look, who later took her pitch to photograph London drug clinics.

“From the very first moment I took pictures [on the streets of Philadelphia], I loved it,” Mark told the Inquirer’s Michael Matza in 1988. “The thrill was the idea of just being on a street, turning a corner and looking for something to see. It was just an amazing feeling. … Photography became my obsession. … In a way it’s not so different when I go out to work now. It’s just that now I have years of experience in knowing how to use that little machine in front of me – at least better than I used it then. When it’s good and interesting it’s still that feeling of being on the street and wondering – God, I love this! – what’s going to happen next?”

You can enjoy Mary Ellen Mark’s work in her online gallery.