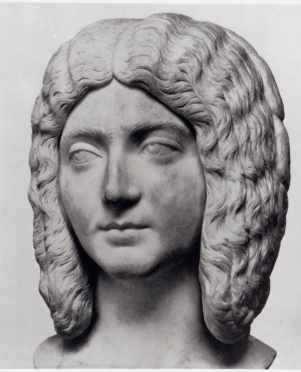 See, I just love this stuff:

Her coiffure queries began, she says, when she was killing time in the Walters Art Museum in Baltimore back in 2001. A bust of the Roman empress Julia Domna caught her eye. “I thought, holy cow, that is so cool,” she says, referring to the empress’s braided bun, chiseled in stone. She wondered how it had been built. “It was amazing, like a loaf of bread sitting on her head,” says Ms. Stephens.

A hairstylist by day, Janet Stephens has become a “hair archaeologist” studying the intricacies of ancient Greek and Roman hairstyles. As WSJ’s Abby Pesta reports, she’s been published in the academic community on her research, which she says proves the intricate hairstyles were not wigs.

She tried to re-create the ‘do on a mannequin. “I couldn’t get it to hold together,” she says. Turning to the history books for clues, she learned that scholars widely believed the elaborately teased, towering and braided styles of the day were wigs.

She didn’t buy that. Through trial and error she found that she could achieve the hairstyle by sewing the braids and bits together, using a needle. She dug deeper into art and fashion history books, looking for references to stitching.

In 2005, she had a breakthrough. Studying translations of Roman literature, Ms. Stephens says, she realized the Latin term “acus” was probably being misunderstood in the context of hairdressing. Acus has several meanings including a “single-prong hairpin” or “needle and thread,” she says. Translators generally went with “hairpin.”

The single-prong pins couldn’t have held the intricate styles in place. But a needle and thread could. It backed up her hair hypothesis.

In 2007, she sent her findings to the Journal of Roman Archaeology. “It’s amazing how much chutzpah you have when you have no idea what you’re doing,” she says. “I don’t write scholarly material. I’m a hairdresser.”

John Humphrey, the journal’s editor, was intrigued. “I could tell even from the first version that it was a very serious piece of experimental archaeology which no scholar who was not a hairdresser—in other words, no scholar—would have been able to write,” he says.

He showed it to an expert, who found the needle-and-thread theory “entirely original,” says Mr. Humphrey, whose own scholarly work has examined arenas for Roman chariot racing.

Ms. Stephens’ article was edited and published in 2008, under the headline “Ancient Roman Hairdressing: On (Hair)Pins and Needles.” The only other article by a nonarchaeologist that Mr. Humphrey can recall publishing in the journal’s 25-year history was written by a soldier who had discovered an unknown Roman fort in Iraq.