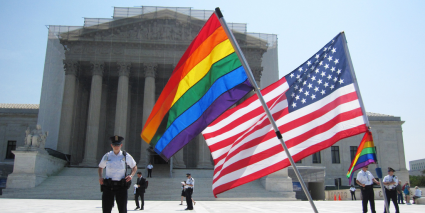 When I think of all the friends and relatives who are now finally equal under the law, I am overcome with emotion. What a great day. The Washington Post:

The Supreme Court on Friday delivered an historic victory for gay rights, ruling 5-4 that the Constitution requires that same-sex couples be allowed to marry no matter where they live and that states may no longer reserve the right only for heterosexual couples.

The court’s action marks the culmination of an unprecedented upheaval in public opinion and the nation’s jurisprudence. Advocates called it the most pressing civil rights issue of modern times, while critics said the courts had sent the country into uncharted territory by changing the traditional definition of marriage.

“The court now holds that same-sex couples may exercise the fundamental right to marry. No longer may this liberty be denied to them,” Justice Anthony Kennedy wrote in the majority opinion.

The country’s first legally recognized same-sex marriages took place just 11 years ago, the result of a Massachusetts state supreme court decision. Now, more than 70 percent of Americans live in states where same-sex couples are allowed to marry, according to estimates.

I'd say the best part of being a Supreme Court Justice is using historical dissents to burn my wife pic.twitter.com/RRVU5Ul5Xz

JUST IN: Pres. Obama to speak on gay marriage ruling at 11a ET from the White House.

AND apparently I was right that Kennedy would leave equal protection law for sexual orientation a complete mess, because he's Kennedy.