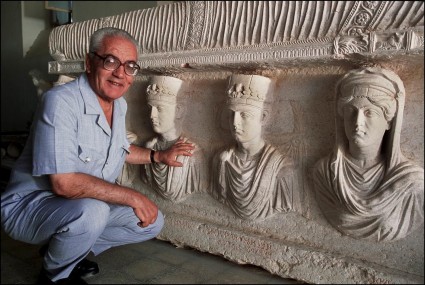 I love archaeology, always have. I spent many hours of my childhood, wandering through museums and looking at ancient artifacts. (Just a couple of years ago, I toured the site of a Colonial-era dig near my house.) For years, I thought wanted to be an archaeologist when I grew up. And when I read this story today, it made me very sad — but also awed. You may already know this, but one of the many unthinkable things the Islamic State forces has been doing is stripping places of their ancient history by destroying historic artifacts and sites. (And selling off the pieces to fund their war.)

This great man was apparently killed because he refused to tell them where Palmyra, the historic Syrian town (a trading hub on the ancient Silk Road and a Unesco World Heritage site), had hidden their antiquities — their sense of themselves as a ancient people. The murder, the rapes — well, we’ve all heard those stories before, from time immemorial. But to deliberately destroy history? What kind of assholes do that? Khaled Asaad was old and may have figured he was going to be dead soon enough anyway, because it looks like he traded his life for the heritage of his people.

And I think that’s worth paying attention to today, if only for a minute of your busy day:

A tragic blow to the archaeology community: Islamic State militants have beheaded one of Syria’s most prominent antiquities scholars in a square in the seized city of Palmyra, where dozens of people gathered to watch, Syrian state media and a British activist group report, via the AP. The body of Khaled al-Asaad, 81 or 82—who spent half a century as head of antiquities in Palmyra—was then taken to the town’s archaeological site and hung from a Roman column, sources say.

“Just imagine that such a scholar who gave such memorable services to the place and to history would be beheaded … and his corpse (is) still hanging from one of the ancient columns in the center of a square in Palmyra,” says Syria’s antiquities chief.