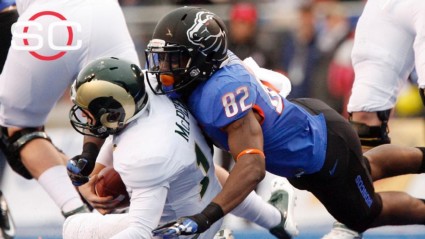 Not much difference. And I think this is much more common than people realize — I know someone who was raped by a Villanova basketball star and never reported it, because she assumed it was futile. She was probably right.

We don’t know yet whether Sam Ukwuachu will be convicted of the charges against him—but we know that the program recently (and eagerly) expressed its intention to add the six-foot-four pass rusher to their rotation at defensive end in time for the season opener at SMU. What we do know is that Baylor took a chance on a player they had every reason to suspect had previously presented a threat to students at another campus, and let Baylor’s students assume the risk that entailed. When a student at Baylor leveled accusations of sexual assault against the player, the school’s investigation—in which the burden of proof is significantly lower than in a court of law—ended without action, despite the fact that the McLennan County District Attorney’s Office found cause to take the matter all the way to a trial on second degree felony charges. We know that officials in Baylor’s football program describe rape accusations against players on the team as “some issues” or “violating a team rule,” the same language they might use to describe a player who broke curfew—even after the player has been accused, indicted, arrested, and, in the case of Tevin Elliott, convicted. We know that the Waco Police Department took months to bring the case to a prosecutor, but that when they did present the case to the DA’s office, the DA took the felony charges all the way to court. We know that the Waco sports media, charged with covering one of the country’s most prominent football programs, failed to report on charges against a much-heralded new transfer for nearly fourteen months, even though those charges were readily accessible to anyone who searched his name at the McLennan County Courthouse. We know that when asked about Ukwuachu a few weeks ahead of his scheduled trial date, rather than acknowledge the charges or decline to comment, Baylor defensive coordinator Phil Bennett told Baylor fans that the team was expecting to have him on the field.

And we know that, when asked about Ukwuachu by the Waco Tribune-Herald after news of the charges finally broke—more than a year after the initial indictment—Baylor head coach Art Briles told reporters, “I like the way we’ve handled it as a university, an athletic department, and a football program.”

Acts of sexual violence contradict every value Baylor University upholds as a caring Christian community. In recent years we have joined university efforts nationally to prevent campus violence against women and sexual assault, to actively support survivors of sexual assault with compassion and care, and to take action against perpetrators. We have established and fully staffed a Title IX office that employs a Title IX Coordinator and two full-time investigators. Maintaining a safe and caring community is central to Baylor’s mission and at the heart of our commitment to our students, faculty and staff.

I’d also like to add here that, unless you’ve ever been up close to a pro or top-level college athlete, it’s hard to understand just how big and powerful they are. I’ll never forget the first time I covered an event with the 76ers — my neck hurt from looking up.

Now picture someone that size attacking your average 20-year-old co-ed.

I’ve seen studies claiming that violent assaults are no more common among football players than anyone else. And to that I would say, how many women never even bother to report it? How many women took the cash to shut up?