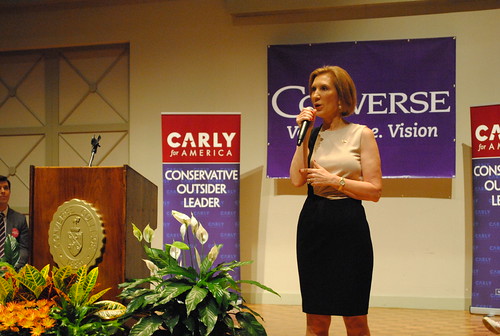 Fiorina, who Ted Cruz has allegedly selected to be his VP, is a raging narcissist, according to her ex-husband. Read this:

According to Todd Bartlem, there is nothing surprising in Carly’s tendency to place herself at the front and center of every narrative.

‘She is pathologically narcissistic and all she cares about is her,’ he said. ‘Nothing holds together with her.

‘I got kind of suspicious of her towards the end of the marriage because she had no old friends. She had nobody that she knew in the past, and I thought, “God that’s kind of weird.”‘

Today Bartlem believes the reason lies in Carly’s ‘modus operandi’ of ‘dropping people’ as soon as they have fulfilled their useful purpose in her life. Certainly it’s what he believes happened to him.

‘I had no utility and that’s what the judgment was,’ he said. ‘If you aren’t useful to her, your time is over. She learned that in business school. I was heartbroken. It was brutal.’

Bartlem claims that when Carly walked out on him she did so without leaving so much as a forwarding address or phone number. A year after the divorce, he claims, she pulled up in the driveway of their former home and calmly said, ‘I will never see you again.’

She seems nice, doesn’t she?