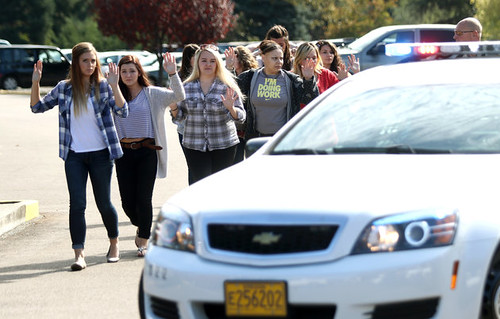 This town in Oregon loves guns, hates the government, and thinks Obama is a Kenyan. They’re buying guns and they don’t want the president to visit:

ROSEBURG, Ore. — A week has passed since J.J. Vicari huddled underneath a desk while gunshots exploded in the classroom next door. Now, he is thinking about guns. Not about tightening gun laws, as President Obama urged after nine people were killed at the community college here. But about buying one for himself.

“It’s opened my eyes,” said Mr. Vicari, 19. “I want to have a gun in the house to protect myself, to protect the people I’m with. I’m sure I’ll have a normal life and never have to go through anything like this, but I want to be sure.”

Mr. Obama plans to visit Roseburg on Friday to meet the grieving families of yet another gun rampage, but many people here are bristling at his renewed call for stricter gun laws. In some ways, the rampage at the college by a 26-year-old student, Christopher Harper-Mercer, has actually tightened the embrace of guns in a rural town where shots at rifle ranges echo off the hills and hunters bag deer and elk through the fall.

Some families touched by the violence and students who fled gunfire said they now feared that the kind of bloodshed seen inside Classroom 15 at Snyder Hall, Umpqua Community College, could happen anywhere. Some said they were planning to buy guns. Others said they would seek concealed-weapons permits. Others, echoing gun advocates’ calls for more weapons on campus, said the college should allow its security guard to carry guns. A few said they thought that stricter gun control laws could have averted the massacre.

One thought on “After the shootings”