I went to see “The Martian” yesterday. Wonderful movie, if about 25 minutes too long, but a really strong Oscar bid for both director Ridley Scott and star Matt Damon.

I always feel guilty about the space program, because when I was a kid and it was in its glory, I paid very little attention to it. (Although the whole neighborhood crammed into our living room to watch the moon landing. We were the only family with a color TV.) And every time I see Ron Howard’s remarkable “Apollo 13” –a movie I stop to watch every time I pass it around the dials—I cringe when I think how little attention Americans paid to that real life life-and-death space drama while it was actually happening.

You know what these two movies — one fiction, one fact– have in common? They show an America that used to dream big, that honored its visions and saw far beyond the horizon. When Americans were known for pluck, and ideas, not for shooting at everything that moved. An America that saw science as a tool to change our destiny, not something to find more places to frack. That was the America we used to have, until the Republicans went batshit crazy and fucked it up for everybody.

We started to cut funding for NASA in the 1980s (guess whose idea that was?) Their funding took a minor bump after Hurricane Katrina, but the Republicans have been careful to shave an already-threadbare budget so we don’t get embarrassing reports on what their energy donors have been doing to the planet. 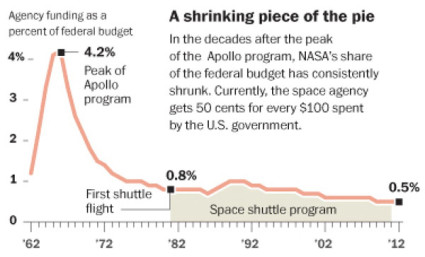 We’ve gone from being the country that dreamed big to the bare-minimum. Thanks to trickle-down economics and the politicians who enable it, we can’t even fix the bridges and fill the potholes.