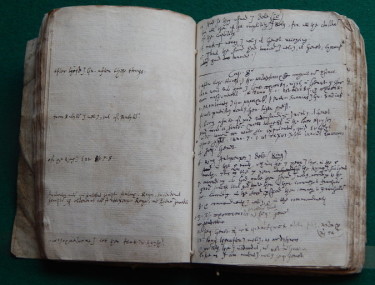 I just love these stories. Imagine being one of the people who worked on this translation:

The King James Bible is the most widely read work in English literature, a masterpiece of translation whose stately cadences and transcendent phrases have long been seen, even by secular readers, as having emerged from a kind of collective divine inspiration.

But now, in an unassuming notebook held in an archive at the University of Cambridge, an American scholar has found what he says is an important new clue to the earthly processes behind that masterpiece: the earliest known draft, and the only one definitively written in the hand of one of the roughly four dozen translators who worked on it.

The notebook, which dates from 1604 to 1608, was discovered by Jeffrey Alan Miller, an assistant professor of English at Montclair State University in New Jersey, who announced his research on Wednesday in an article in The Times Literary Supplement.

While the notebook has yet to be examined by other scholars, experts who have reviewed Professor Miller’s research called it perhaps the most significant archival find relating to the King James Bible in decades.

David Norton, an emeritus professor at the Victoria University of Wellington in New Zealand and the author of several books about the King James Bible, called it “a major discovery” — if not quite equal to finding a draft of one of Shakespeare’s plays, “getting on up there.”