Scientists have detected a disproportionate number of methane bubble plumes off the Washington and Oregon coast. The warming Pacific ocean may be triggering the release of this powerful greenhouse gas, which has remained frozen beneath the seafloor for thousands of years.

The new study, which has been accepted for publication in Geochemistry, Geophysics, Geosystems, details over 160 bubble plumes observed over the past 10 years. An inordinate number of these plumes were observed at a critical depth where frozen methane “ice”, or hydrate, decomposes on account of warmer ocean temperatures. Lead researcher H. Paul Johnson from the University of Washington says these plumes are probably not coming from the seafloor sediments, but rather from decomposing frozen methane.

The downstream effects of this leaking methane aren’t entirely clear, though historically, methane has contributed to sudden and dramatic swings in the Earth’s climate. Once in the Earth’s atmosphere, methane acts as a powerful greenhouse gas. On a related note, warming-related methane emissions have also been detected in Arctic permafrost and off the Atlantic coast. 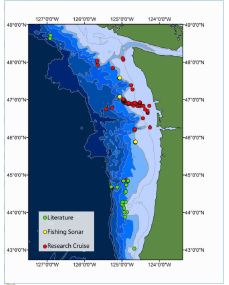 This map shows the locations of the 168 bubble plumes included in the study. (Credit: University of Washington)

It’s also not clear how much methane gas is actually getting to the surface. The researchers say that most of the deep-sea methane is getting gobbled up by marine microbes during the journey up. These microbes convert the methane into carbon dioxide, which results in low-oxygen and acidic conditions in deeper offshore waters. From there, this tainted water trickles along the coast and makes its way into coastal waterways.

“Current environmental changes in Washington and Oregon are already impacting local biology and fisheries, and these changes would be amplified by the further release of methane,” noted Johnson in an AGU statement.

One thought on “Passing gas”