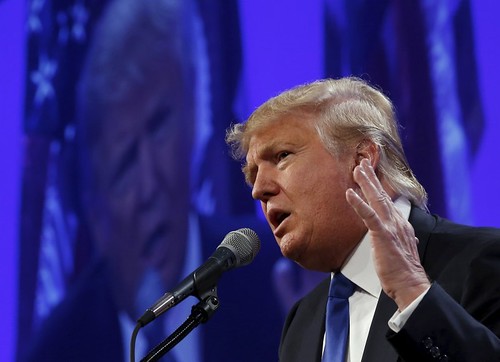 Donald Trump doesn’t know the GOP talking points! I’m actually looking forward to watching this hearing. Get out the popcorn:

Returning to Congress this week to testify about Benghazi more than 30 months after she first testified about the Libyan terror attack, Hillary Clinton is being summoned to answer yet more Republican queries, many of which seem to revolve around wild conspiracies.

As the Benghazi Select Committee’s reputation continues to take on water for incompetence and run-awaypartisanship, new jousting among Republican candidates is also denting the entire Benghazi pursuit; a chase that’s been sponsored by Fox News for years.

The latest sparring features Donald Trump and Jeb Bush arguing over President George W. Bush’s responsibility for the terror attack of 9/11. “When you talk about George Bush, I mean, say what you want, the World Trade Center came down during his time,” Trump said last week.

Bush’s brother lashed back out at Trump, calling his claim “pathetic,” while other Republicans rushed to Bush’s side. “I think Donald Trump is totally wrong there,” Rep. Peter King (R-NY) said on Fox Radio. “That sounds like a Michael Moore talking point” said King, referencing the liberal filmmaker who documented George W. Bush’s failings. (Fox News did its best to help Jeb, too.)

“Blaming 9/11 on Mr. Bush is taboo for Republicans and has largely been off-limits for Democrats,” noted TheNew York Times. But by ignoring those Beltway protocols, Trump threw a spotlight onto the questions of accountability, George Bush’s inability to protect Americans from terror attacks on U.S. soil, and why Jeb Bush today routinely stresses that his brother kept America safe after thousands were killed on 9/11.

CNN’s Jake Tapper raised the issue of hypocrisy with Jeb Bush on Sunday’s State of the Union, pressing the candidate to explain why if his brother wasn’t responsible for the 3,000 American deaths on 9/11, somehow Obama and Clinton are to blame for the four U.S. casualties from Benghazi.