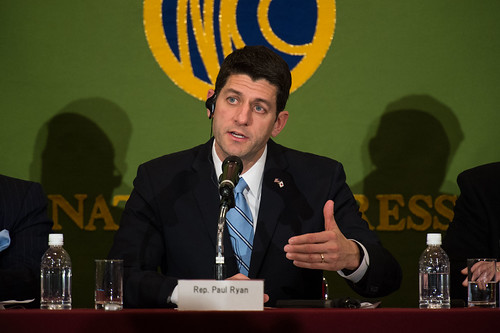 I don’t think the Republicans have the votes without the Democrats:

WASHINGTON — Representative Paul D. Ryan said for the first time Tuesday that he would be willing to serve as speaker if all factions of House Republicans could unite behind him.

Mr. Ryan addressed his colleagues and called for a change to the way the job is structured, saying the speaker should be more focused on communicating the message of the party and house and less on fundraising according to members in the room. He urged members to not try and change the rules “for one group.”

Mr. Ryan’s decision changes the dynamic in the race for speaker, and could give Republicans much sought after clarity after weeks of internal turmoil. But it was unclear whether he would win over hard-line Republicans who had forced Mr. Boehner’s resignation and effectively blocked Representative Kevin McCarthy, the majority leader, from ascending.

One thought on “Ryan as speaker?”