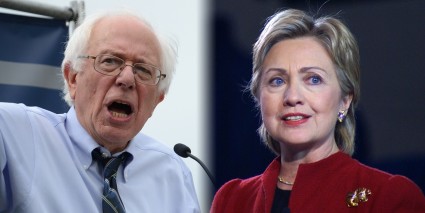 So the Sanders campaign is now going to break away from its pledge to run an issues-oriented campaign without personal attacks. And their rationale? Clinton is making them do it.

There is so much about working on campaigns that I don’t miss, but the Orwellian use of language has to be right at the top of the list:

“What people saw from Bernie on Saturday night is his willingness to engage in a dialogue about these differences,” Tad Devine said, doubling down on the new attack strategy that included calling out her positions on the Trans-Pacific Partnership trade deal and the Keystone XL pipeline. “It’s been decided that we’re going to talk about differences between the candidates. But [Clinton] did so aggressively on the gun issue and by implying that somehow Bernie is engaging in implicit sexism.”

Since the first debate, Clinton, also without naming Sanders, has pushed back on his assertion there that “all the shouting in the world” would not fix the country’s problem with gun violence.

“I’ve been told to stop shouting about guns,” Clinton said at a rally in Virginia on Friday, a line she repeated Saturday during her remarks at the J-J dinner. “Actually I haven’t been shouting, but sometimes when a woman talks, some people think it’s shouting.”

Sanders’ team bristled at the suggestion that the self-described democratic socialist’s comment in the debate was inherently sexist and implied it served as the motivation for Saturday night’s attacks.

3 thoughts on “A rationale presents itself”