I am having internet connection issues today, so, I am posting when I can. I don’t think it is my new modem, I think it may be the utility work at the top of my street where they are putting in a new highway. So, there may be mostly “fluff” today and I really don’t want to speculate about the debate scheduled for Saturday. But, if you want to speculate on that in the comments, feel free.

Anyway, smoking. I quit in 2000 without much problem at the advise of my physician. Americans are smoking less. I ran up on an article about 17 percent that are still smoking in the U.S. …

Half a century ago, more than two of every five adults were smokers. But that has fallen steadily over time. From 2005 to 2014, the adult smoking rate declined from 20.9 percent to 16.8 percent. Public health officials are hoping to to drive that rate below 12 percent by 2020.

I remember when I was a kid in the 60’s it seemed everyone smoked. It was not unusual to see teenagers smoking openly at that time. Now, even here in the South where I live pretty unusual to see someone smoking. I am sure much of that is due to smoking laws and ordinances (even in bars where one can open carry a gun.)

Cigarette smoking has fallen sharply among 18- to 24-year-olds. In fact, the percentage of smokers in that age group dropped by nearly a third over the past decade, CDC data show,  the sharpest decline of any group. But that striking change might be attributable, at least in part, to the growing popularity of e-cigarettes, hookahs and other “non-cigarette tobacco products,” CDC officials said.

E-cigarettes (vaping) is another topic, but, I’ll say this: I don’t know what the trade off is and what are the chemicals in e-cigarettes. The days of having a “smoking area” at the local High School are way past.

People with lower levels of education tend to smoke at higher rates. The new data also show that smoking among people with graduate and undergraduate degrees has fallen more sharply over the past decade than among most other groups.

It is worth looking at the graphic on this… 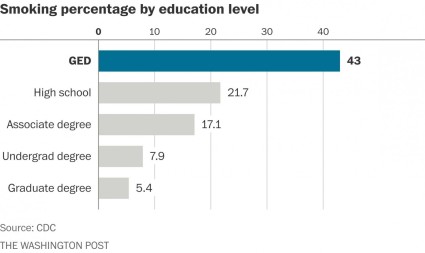 This doesn’t surprise me, the magnitude of difference does.

U.S. adults who are uninsured or on Medicaid smoke at rates more than double that of people who have Medicare or private insurance. There could be many factors at play here. But health officials said one contributing factor is likely the “variations in tobacco-cessation treatment coverage and access to evidence-based cessation treatments” across different insurance types.

So, this may be one instance that “affordable” does not mean “equivalent” services across the different types of insurance Americans have access.

Hopefully, the campaign against smoking and the promotion of quitting will continue to see gains in the number of “former smokers.”

One thought on “Fluffy Friday… Smoking in America…”