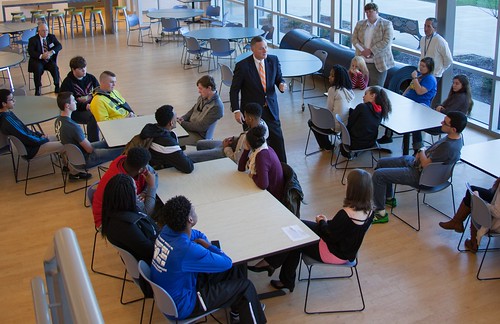 It’s not complicated. Investors get a huge return on their “donations” in the form of a huge tax credit after 10 years — one that outperforms the S&P. And since it’s backed by the feds, it’s safer than anything else. The problem is, the schools are failing:

The charter-school industry — consisting of schools that are funded partly by tax dollars but run independently — may be heading toward a bubble similar to that of the subprime-mortgage crisis, according to a study published by four education researchers.

The study, “Are charter schools the new subprime loans?” warns of several factors that appear to be edging the charter industry toward a bubble premeditated by the same factors that encouraged banks to start offering risky mortgage loans.

“Supporters of charter schools are using their popularity in black, urban communities to push for states to remove their charter cap restrictions and to allow multiple authorizers,” one of the study’s authors, Preston C. Green III, told The Washington Post, where we first read about the study. “At the same time, private investors are lobbying states to change their rules to encourage charter school growth. The result is what we describe as a policy ‘bubble,’ where the combination of multiple authorizers and a lack of oversight can end up creating an abundance of poor-performing schools in particular communities.”

The study’s authors point to a change in business practices as the catalyst of the bubble in the subprime industry and possible bubble in the case of charter schools.

An honorable mention to the Maryland team of white collar defense attorneys.

One thought on “Another bubble”